It was included in much written communication, usually as a way of showing solidarity and optimism about the fandom and its influence and future popularity.

It likely took off from the slogan Frodo Lives!. 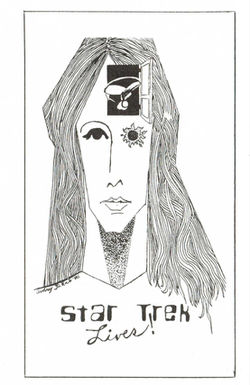 illo by Audrey Jakob, 1980, printed in the con program for Starbase Baltimore

"Star Trek Lives!" was also the name of early fan campaigns, as well as the immensely popular and formative book Star Trek Lives!. It is unknown if those two things took their name from an organic use of the phrase by fans, or if the book took its name from "Frodo Lives!" and fans adopted it as a catch phrase.

For other uses of the term, see Star Trek Lives!.