For articles with a similar title, see The Communicator.

The Communicator is a science fiction and fantasy newsletter of fiction, art, articles, and reviews.

It appears, via info in the June 1974 issue, that the first two issues of this zine were perhaps titled differently. At least two fans in the third issue refers to that issue as the "first one" after this reorganization. 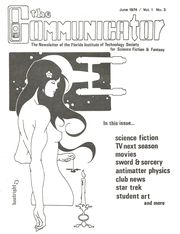 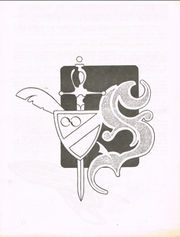 The editorial addresses the student fan club, future publishing plans, changes in publication names, a little distance from Star Trek, and other goals:

There are a great many things that I would like to say about the collection of writings and artwork that you now hold in your hands. Primarily, though, I would like to say that I am extremely pleased with the progress we have made with this publication. Throughout the entire school year, our club has been trying to stimulate interest in the science fiction field, and then provide a nucleus around which that interest could be constructively used here on campus. With this, our third and last issue until fall quarter, we have managed to put together a truly student written, student edited publication. Even though it deals with our own particular Interest group (science fiction), it proves that it can be done, and done with a certain amount of pride and professionalism. This publication, then, Is intended first of all for the enjoyment of our club members (both those who put it together and those who are reading this for the first time). Some of the news articles contained herein are relatively well known to those of us who deal with the science-fiction/media field from day to day, but will be advanced knowledge to those who don't. Secondly, we present these contents for the inspection of the faculty and students of the Florida Institute of Technology, some of whom know their sci-fi pretty well and others who have never really been introduced to the field. This issue, also, is the first that will see international distribution to many people involved with science fiction and science fiction fandom around the world, in hopes of establishing ourselves as a viable organisation in fandom and perhaps even drawing some support for our activities next year. When this time next year does roll around, I hope we have a few more publications underway: a volume of student work in the sci-fi/fantasy field that we have been planning; a campus-orientated science-fiction/general media publication in somewhat the same format as our university paper, the Crimson,; and perhaps even a prozine for the science fiction field at large. Who knows...?

With all of these groups in mind, we have assembled a fan-produced magazine, better known as a fanzine, which deals with our own club, touches on some of the basics as well as some of the deeper aspects of science fiction and fantasy, and Is a miniature showcase of some of the best student work we can find here at F.I.T. The result is what you are now reading, and we hope that everyone, club member and non-member alike, will enjoy our efforts and take the time to drop a line of comment to me, letting us know what you liked and what you would like to see.

For those of you who have seen our earlier issues, you will have noticed, first of the change in title this month. I have decided to use the title Communicator or (formerly the name of that volume of student writing and artwork which we Intend to publish) because of setbacks In the original Communicator project (which was to have been published this summer). Also, when we do publish a volume of student work, I think it would be better to have a title that does not directly link itself with Star Trek, since we are not fundamentally a Star Trek club. This newsletter, though, does overtly concern itself with Star Trek, simply because many of the contributing club members do have a strong interest in the show.

There is another major format change with this issue. I decided to take some of the student work that was planned for the first issue of the original Communicator and use a piece or two with each issue of this merger between the Communicator and our Club Newsletter. This issue contains a mixture of student work and ideas: news reports, reviews, columns, artwork, and even a short story. This issue's quality, both in content and printing, is an improvement over last issue's, just as next issue's will be over this. Next Issue, hopefully, we'll be able to run photographs, which will open a whole new world of format possibilities.

In closing, I would like to extend our sincere thanks to the people who contributed work to this issue and those who helped put it all together. Special thanks go out to Penthouse Magazine and NASA, for allowing us to reprint some of their artwork, and to the F.I.T. Publications Department, for printing this issue up on such short notice during the last two weeks before summer vacation. Peace.

The Communicator is the newsletter of the Florida Institute of Technology Society for Science Fiction & Fantasy, with in this issue, as the cover says, "science fiction, TV next season, movies, sword & Sorcery, anti-matter physics, club news, Star Trek, student art, and more" -- exactly what it is, in fifteen pages or less. The printing appears to be either offset or multilith, and looks nice. I'm impressed. Lots of art and articles crammed in there -- well, actually, it is pretty well laid out, and is more than worth the price. It puts TCTS to shame. [1]

The Communicator 4/5 was published in Fall 1975 and contains 72 pages. "Caroline Munro full-page, art and photos." 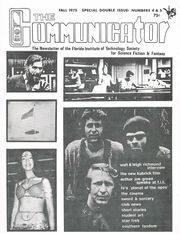 A friend of mine once bet me that I would never find a zine that could please me. He has lost this bet some four times, and this zine makes it five. This zine is published by a college science fiction and fantasy club. Note that this is not merely a Trek zine.

As always, we are treated to an editorial for opening the issue. The first article is a marvelous explanation of fandom. I have long awaited such an article. For all those TREK fans wrapped up in their own universes, you've got to read this. There is a line in it about Trekkies being the largest part of fandom. that's not quite true. Otherwise, the article was fantastic. Next is the President's letter, lettered, and club news. The club news reviews a convention that was attended by the membership, along with photos. The club laid out money for engraved plates, and they came out fantastic. There are sketches that take on an almost professional quality, along with an interesting gag photo you must see. There is a club news report (minutes and such), and a unique quiz. There is an in depth interview with Walt and Leigh Richmond, which is a joy to read. (I just got their latest book, The Probability Corner, Ace #37088, $1.50, AND IT LOOKS MARVELOUS.) An article on Sword and Sorcery follows, a ST tech quiz, a filksong, a marvelous short story, a comedy sketch, an event report on sf writer Joseph Green's speech at F.I.T., media articles, book reviews — in general a lot of fantastic material, too numerous to mention here.

This is what a zine should be. It claims to be an F & SF zine, and it is. It covers everything in depth, and does not give too much devotion to any one type of article. This zine is published only once or twice a year (a real pity), but the efforts of a supremely competent group comes off fantastically. It just goes to show what can be done when a lot of work is properly arranged.

WRAP UP & SCORE: This zine is photo offset, is the highest quality effort I've seen since the last bet I won, and comes off without question as one of the top ten zines in fandom.

A final note. Get this zine, because it is literally a joy to lead. Money has been spent wisely, and the editor is a wizard. A lot of money is not the answer to a fan's dream... [2]