Star Trek: Houston was 1976 Star Trek con held in Houston, Texas. It was billed as "The Largest Star Trek Convention Ever Held in the Southwest!"

This con is not the same thing as Houstoncon. 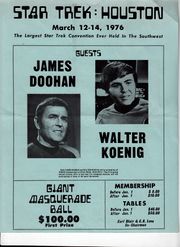 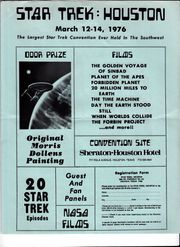 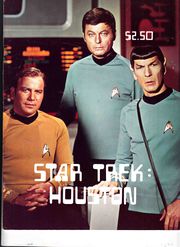 a con souvenir book published by The Phantom Empire.

It had guest and fan panels, twenty Star Trek episodes, a SF film room, "NASA films, a masquerade, and a dealer's room.

The door prize was a painting by Morris Dollens, which was printed on the back of the souvenir program book.

It may have continued as a Trek/Comics con as late as 1983. There is an ad for "Star Trek Houston" in an issue of Starlog for this con ("Trek/Comics") at the Hyatt Regency in Houston on June 2-5, 1983.

Contents of the Con Souvenir Book

"Much of the material in this publication was donated by the RB-CC published by Jim Van Hise."

Images from the Con Souvenir Book