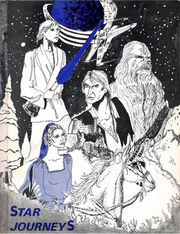 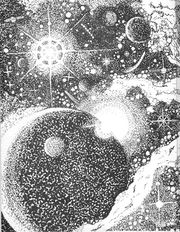 Star Journeys is a Star Wars 106-page anthology published in 1979 by Tracy Duncan. It has art by Paula Nutter, Tracy Duncan, and Nancy Duncan.

A second issue of this zine was cancelled when the Duncan sisters gafiated from fandom. See ...it has become increasingly clear to us that we cannot continue publishing a fanzine for a movie in which we find so little to recommend.

The zine had a quick and serious change of content from when it was proposed.

From a notice in Scuttlebutt #13:

A trilogy of Star Wars stories: 'Solo's Quest' by Nancy Duncan... 'Four Days in the Death of Han Solo,' by L.A. Adolf, a tense whodunit. At the Rebel base, Han is grievously wounded by an old pirate friend turned Imperial infiltrator. Han is determined to hang onto life and to warn Luke and Leia about the spy. 'Seeds,' by Pam Buchanan, Leia is beginning to feel the effects of a destroyed home world and the constant pain of order Rebels to their deaths.