Stabby the Space Roomba is a Tumblr character/meme that grew out of the Space Australia/"Humans are Space Orcs" memes. The idea came from sepulchritude[1] in a post that has gained over 140k notes:

imagine an alien stepping onto a human starship and seeing a space roomba™ with a knife duct taped onto it, just wandering around the ship
“what is the point?” asks the alien as another crew member casually steps over the knife-wielding robot. “is it to test your speed and agility?”
“no it doesn’t really go that fast,” replies the captain.
“but then what is its purpose?”
“I don’t know,” the captain says, leaning down to give the space roomba an affectionate pat. “it just seemed cool” 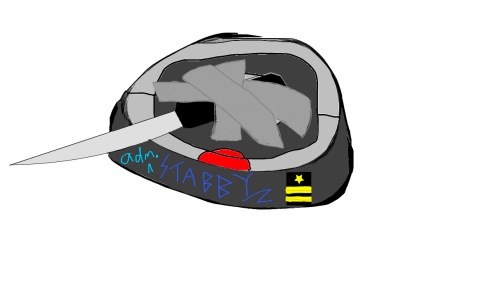 Since then, it has become a mainstay in "space Australia" fandom and made an appearance in many crossover ficlet/comments. It has a tag on AO3 (with few fics), and has collected fanart and an "I Lik the Bred" poem[2].

In 2017, Stabby's adventures continued. It was established that Stabby "got to take the rank of the highest ranking crew member it stabbed. The ceremony for Flag Admiral Stabby was beautiful. The captain gave a speech."[3].