Songs of Fire, Songs of Life 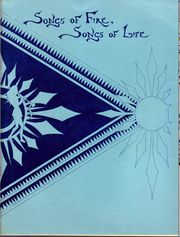 Songs of Fire, Songs of Life was published in 1979, 8 1/2 x 11, saddle stitch. It contains filk songs written by Fern Marder. It is a special edition of Nu Ornamel Collected. 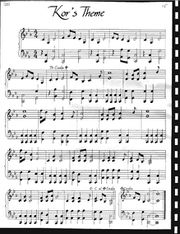 "Kor's Theme"
From the editorial:

Welcome to Nu Ormenel Collected, Volume 4 Supplement: Songs of Fire, Songs of Life. And, as it was Fern's privilege to do the introduction to Arakenyo, it is now my turn to do the intro on this songbook--which is all Fern's work from beginning to end.

I've never known very much about music, except that I know what I like to hear. At the same time, it's always been important to make the Nu Ormenel universe as complete as possible. That has required, in the past, research and reading in such varied subjects as meteorology, topology, and agriculture, to name a few. But there was a gap in the Ormenel, a lack, a void in the universe's creativity. The Ormenel had no music. Art it had in plenty, and all the other forms of creative ex pression that I could command. But the lack of music and poetry was as depressing as a favorite movie with the sound turned off. When someone offers you a large sum of money, do you turn it down? When Fern showed up, now some three and a half years ago, and revealed to me that she wrote poetry and music (and could fry eggs while doing a fast soft-shoe)--well, I sort of grabbed her. This was opportunity sneaking up to my door, a way to fill our stories with song--to wit, a person to foist off extra work onto. (Watch for our upcoming musical spectacular, "The Ormen and I," starring John Travolta as Kor Alkarin and Barbra Streisand as Tavia Nelson.) Well, anyway. I am very proud to present Songs of Fire, Songs of Life. The twenty-five songs in this supplement range from rousing to humorous to deeply sorrowful. They are some of the songs of an alien people—different melodies and un usual rhythms, forms of expression that reveal the contours of the culture of the Ormenel. They were written on piano and guitar, but for many of them we envision the use of other stringed instruments, oboes, pipes and drums. I hope, even for those of you out there who don't read music (like me), that you will appreciate a work of love, beauty and care on Fern's part. Kor Alkarin makes a comment

in "Fireside Song" (Volume 3) to the effect that 'even when I am no longer a memory, these songs will live on.' May that turn out to be equally true for the music in Songs of Fire, Songs of Life. 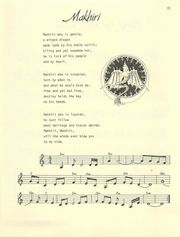 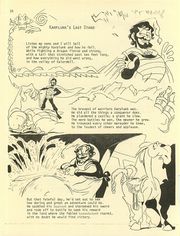 From "The Hunter's Harmonies"

Kilingau are hunters. And they known of no finer way to end a hunt than to sit around the fire, roasting their game, and singing songs of noble deeds, raucous jests, joy and love, sorrow and defeat. The music presented in this songbook may be all the music written especially for Nu Ormenel to date, but it is by no means all the music in Nu Ormenel.

Carol had some very definite ideas about Ormenel music when I first met her, and, since then, we have found quite a large selection of Ormenel-type music which we listen to while we write (it's rather difficult to write and play an instrument at the same time. . .). The music of the Ormenel is characterized by simple sounds in complex combinations As with many other facets of daily life, kilingau do not apply advanced technology and mechanization to the arts. A kiling would be horrified at the idea of an electric guitar or asynthesizer. Music is a part of the soul of a kiling and, as such, is prized as a basic form, not to be taken from nature. Kilingaven instruments tend toward the simple: pipes, drums, shell and animal horns, basic strings, some rudimentary brass, perhaps a keyboard-type instrument or pipe-type organ. Variations in music are built more on harmonies and altered rhythms than on different-sounding instruments played together. Individualistic kilingau are not enormously fond of playing in orchestras. Finding kilingaven instruments isn't hard. Carol bought a lovely bamboo flute at a street fair a few months ago. Bongos and others mall drums turn up everywhere. Perhaps you have a recorder around the house from a school music class--or a pair of sticks or maracas. Some of the most 'kilingaven' music we've found is medieval music. Not only are the early instruments quite fitting, but the tone and flavor of the music seem to do quite well for kilingau. Another good source is Israeli folk and dance music which has much the right mood and sound. And the songs of the Six Day and Yom Kippur Wars could have been written for the Orashathnavi Revolution or the war with the Federation. We're especially partial to records by two Israeli kilingau who call themselves the Parvarim. Another find was the music of Paul Winter. The use of 'primitive' instruments and natural sounds to bring across very natural themes seems perfect for the Ormenel. His latest album, Common Ground, and some of his very early albums are particularly fine. Movie scores occasionally have the right 'feel,' even if the instrumentation isn't ideal for the Ormenel. Michel Legrand's score for The Three Musketeers has some marvelous music (naturally, all those swordfights!). There are two bands on the score of Patton that are particularly poignant when applied to Kor and the revolution. Parts of the scores for Exodus, Z and The Lion in Winter are stirring, sensitive, and appro priate to kilingaven themes. There are some wonderful kilingaven marches on the score album from the Montreal Olympics. You'll notice that most of the music I've listed are instrumental pieces. This is largely because it is hard to find songs that fit the Ormenel in both music and lyrics. Finding the right lyrics is a hard task, because of the necessary subject matter. This is somewhat ironic, as songs, with elaborate lyrics, are so very important in kilingaven culture Kilingau favor an oral rather than a written tradition, and so the minstrel and troubadour are very much a part of daily life. Such skilled performers are highly respected and generally welcomed wherever they bring their songs. In this respect, I am re minded of an oft-mentioned theme: may I do one deed in my life that may be worthy of a song. This holds very true for kilingau.

If you can find them, the old Stone Ponies' albums (Linda Ronstadt was their lead singer, many moons ago) have some wonderfully kilingaven songs: "Evergreen" (". . . how high is the price we must pay for the springtime. . ."), "Orion" (". . . how long will my trial be. . ."), "Sweet Summer Blue and Gold," "Driftin'," and "Autumn Afternoon." The song, "Today," on the Jefferson Airplane's Surrealistic Pillow album is a great song for Kor and Tavia. And, again, some of Paul Winter's music.