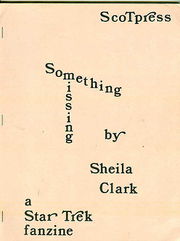 Something Missing is a 112-page gen Star Trek:TOS AU novel by Sheila Clark. It was published in Scotland.

It was illustrated by Virginia Lee Smith.

This is an alternate universe story in which Spock became a scientist on Vulcan instead of joining Starfleet. Children on a colony planet have been going missing - kidnapped by a native race.

Although on a casual glance this story would appear to be mainline Trek, this is actually the third story set in the universe established in Something Hidden.

Something Hidden was based an the premise that Spock went to the Vulcan Science Academy instead of joining Starfleet, During the course of the story, Spock, promoted to Chief Scientist, was heading a survey which was investigating the imminent breakup of a moon. The scientific party was rescued From the moon by the Enterprise, and when the ship's Tellerite science officer was killed, Spock took aver the position. On the ship's eventual return to Vulcan with the rescued scientists, Spock managed to join the ship as science officer. In the second story in the series, Something Lost, a navigational malfunction sent the ship into unknown space. It had been established in Something Missing that Kirk did not wholly trust the judgement of his first officer, a man named Wood. When Wood was killed, Kirk appointed Spock to the position of first officer. This brought the series almost into line with series Trek; the only difference being in Spock's background. Usually an alternate universe story has obvious differences from series Trek; this one does not have obvious differences. I have in mind a fourth story for this series, but unless it produces these differences, it will be written as ordinary series Trek.

However, obvious alternate universe story or no, I hope you enjoy Something Missing.