Some Comments (on lesbianism) by Marion Zimmer Bradley

Some Comments (on lesbianism) by Marion Zimmer Bradley is a 2-page essay by in the Darkover zine Moon Phases #8. 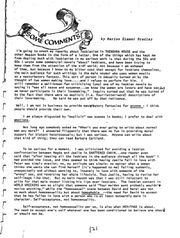 I'm going to couch my remarks about lesbianism in THENDARA HOUSE and the other Amazon books In the form of a letter. One of the things which has kept me from dealing much with lesbianism in my serious work is that during the 50s and 60s I wrote some commercial novels "about" lesbians, and have been trying to keep them from the attention of the s-df world; not because I am ashamed of them, but because I know to my bitter cost that except for lesbians themselves, the main audience for such writings is the male voyeur who uses women mostly as a masturbatory fantasy. This sort of person is sexually turned on by the thought of two women making love..... and I refuse to perform for him. I still remember a well-known fan criticising (yes) one of my lesbian novels by saying it "was all tease and suspense... we know the women are lovers and have sex, but we never participate in their lovemaking." Inquiry turned out that he was turned of[f] by the fact that there were no explicit (i.e. four-letter-word) descriptions of their love-making. He said he was put off by that reticence.

Well, I am not in business to provide masturbatory fantasies for anyone; I think people should provide their own. I am always disgusted by "explicit" sex scenes in books; I prefer to deal with emotions.

Not long ago somebody asked me "Aren't you ever going to write about normal men any more?" I answered flippantly that there was no fun in providing moral support for blatant heterosexuals; but I was serious. Anyone can write about that kind of thing; they can read Barbara Cartland.

To be serious for a moment. I was criticized for avoiding a lesbian confrontation between Magda and Jaelle in SHATTERED CHAIN...one reader even said that "after teasing all the lesbians in the audience through all the book" I had avoided the issue, and they seemed to think having Jaelle fall in love with Peter was simply evasion; no, my attitude was simple: no matter what a woman thinks she wants she can find herself (it's happened to me) falling suddenly, unexpectedly and without wanting to, insanely in love with someone of the "wrong" sex, and reversing her whole lifestyle. Thus Jaelle, having to revise her self-image like that. But my main reason was that I was still reluctant to write for that male voyeur licking his lips over lesbians. The lesbian content in WORLD WRECKERS was so slight that someone said "Your maiden aunt probably wouldn't notice anything," while the "homosexual" scene between David and Keral was not so much about homosexuality but about homophobia — the need for David to accept that he has fallen in love with a person who is at least outwardly male in character. Self-acceptance, not homosexuality.

Self-acceptance, not homosexuality per se, is also what HERITAGE is about. The need to accept one's self whatever one has been conditioned to believe one should or should not be.

In THENDARA HOUSE I included a lesbian character...Camilla... and I actually, in the first draft, wrote much more about the slow acceptance by Magda of her own lesbian character. I minimized it for a general audience for a very simple reason; if I had made them lesbian from the beginning, my audience of readers would say something like "Oh, she's talking about lesbians, not ordinary women; she has nothing to say to me." and tune out any message they might otherwise absorb from the story.

In the original version of THENDARA HOUSE, Magda's affair with Camilla begins about halfway through the book, and is followed by a long discussion of the institutionalized nature of lesbian relations within the Guild-Houses. A long section was omitted which had as its' background the growing hostility and confrontation between Keitha and Camilla, and Keitha's shock when she finds herself in a growing and increasingly emotional bond with Marisela.

However, fictional technique delayed Magda's affair with Camilla and her self-discovery to a part of her growing confusion about her own self-image and sexual identity to the explosion of sexual experiment at the Midsummer sequence.... when within 24 hours she has sex first with Montray, then with Camilla. At this point she is so thoroughly confused that she doesn't know who or what she is or what she wants... several scenes are extant dealing with what is mentioned at the end of CITY OF SORCERY; her close emotional bond with Callista, and with her choice not to have a child by Andrew, and the time when she had been "obsessively, agonizingly" jealous of Damon and of Jaelle's choice to bear Damon's child.

One such scene, curiously, broke the block in finishing my overtly gay novel CATCH TRAP, oddly enough.. After writing that scene of Magda's jealousy of Damon, I found I could understand why it was necessary, toward the end of that book, for Tommy to realize that the only woman he has ever desired was Stella...the only woman in the world he could not have.

I didn't intend to have all woman characters in CITY OF SORCERY: it just happened that way. To me the most important episode in that book is where Vanessa gets up her nerve to ask Magda fearfully "What is it like to love a woman?" and Magda answers flippantly (but with absolute seriousness) "What is it like to love? To love anybody?"

Now my editor is asking me (rather troubled)[:] "You didn't mean there aren't going to be any women at all in THE DARK BROTHERS [1] do you?"

But since Dark Brothers is based vaguely on an old romantic Dumas novel, I suspect that the "Dark Brothers" will be amply supplied with all kinds of romantic love interests.

I hope so, anyhow. Ted Sturgeon once said that fiction should be the chronicling of "passionate emotional relationships" and I agree with him about 99 44/l00ths per cent.