The Silmarillion Writers' Guild or SWG was founded in March of 2005 by Dawn Felagund as on Yahoo! Groups and LiveJournal. On April 1, 2007, the webpage debuted and, a few months after that, on June 6, 2007, the archive opened to the public. As of November 2019, the SWG archives more than 3,500 stories and has hosted numerous projects in honor of J.R.R. Tolkien, The Silmarillion, and the fans that keep his world alive. For example, the SWG was a longtime sponsoring group of the annual Back to Middle-earth Month challenges that take place in March, of which the SWG is a sponsoring group. Currently, the group hosts regular challenges, live readings, collaborative writing sessions, and fanfiction book clubs.

The SWG is an automated archive run on the basis of the Drupal content management system. It accepts stories and audio fanworks that are related to or based on The Silmarillion or its related works, which include all other books by Tolkien that pertain to the events and ideas of The Silmarillion. [1] It also hosts a reference library with peer-reviewed essays on topics of interest to fans, as well as a growing collection of biographies for many of Tolkien's characters from The Silmarillion.

Dawn Felagund founded the Silmarillion Writers' Guild in 2005. Dawn was new to the fandom, having lurked for about a year at that point. The History section on the SWG website describes its origin story as follows:

An utter newbie to both Middle-earth and the slightly scarier realm of fandom, Dawn was probably the last person who should have announced her entrance into both by starting a group as ambitious as the SWG. However, in a fit of bravery--or foolishness--that is just what she aspired to do.[1]

Dawn admits that the idea for the SWG came during a bout of insomnia but identifies a larger need to contribute to the Tolkien fandom and, in particular, a lack of Silmarillion-specific content in the wave of interest following Peter Jackson's Lord of the Rings films:

Tolkien fandom was at its peak but the Silmarillion-based stories were like the proverbial leaves on the wind, scattered among myriad sites and archives, often written by authors who didn't talk or even necessarily know of each other. Silmarillion fan fiction writers had a single Yahoo! mailing list, but its sole moderator had disappeared and stopped approving messages.[2][1]

The SWG originated on Yahoo! Groups and LiveJournal before opening its website two years later, in 2007. It was originally intended to be a writer's workshop where authors could receive specific feedback on their work. There was no intention to have an archive, a newsletter, challenges, or references--all features that would come to be important in the SWG as it evolved. The writer's workshop never took hold. After setting up the Yahoo! and LiveJournal groups, Dawn, "starting to get scared" by "the enormity of what she'd done," mostly returned to lurkdom.[1] During this time, she began posting her first fanfiction based on The Silmarillion, Another Man's Cage. Interest in this story drew Enismirdal and ford_of_bruinen to join her new group. Ford_of_bruinen especially took on a mentor role, agreed to join Dawn as a moderator, and urged recruitment at the end of July. By early August, the group had about twenty members.[1]

The original SWG website was a hand-coded site that included an automated archive built using the eFiction open-source script, which stopped being actively developed in 2015. In August 2019, an upgrade to the SWG's web server began causing significant issues with the site's aging eFiction archive. According to Dawn, the moderator team was faced with a decision at this point: "We could accept that the site had reached its end and let it slowly die as further updates broke more and more of our code, or we could rebuild the site using software that was keeping up with these changes." Knowing that eFiction was no longer being developed, the moderators had already begun talking casually about migrating to new software; with the server upgrade, they made their decision to rebuild the site using the open-source Drupal content management system. Construction of the site by Dawn and Russandol began in earnest in August 2020, and the new site opened in April 2021.[3]

The new Drupal site allowed considerably more flexibility in building features that extended beyond the archive's primary purpose as an archive for fanfiction and other text-based fanworks. In 2022, Dawn and Russandol worked on expanding the site to accept all types of fanwork, including art, playlists, link collections, videos, and multimedia fanworks. The newsletter, which had ceased following the migration to the new software, resumed in a weekly email format in order to spotlight SWG news and fanworks posted to the site and to promote original content created for the newsletter.

The Silmarillion Writers' Guild formed at an interesting point in the history of Internet Tolkienfic fandom. Peter Jackson's Lord of the Rings films were just recently out of theaters, but the fandom had experienced an ongoing explosion of interest. Conflict was fairly high among different groups and factions of fans, and gatekeeping was common. For example, there was antipathy by some toward movieverse fans, anti-slash sentiment was commonplace, and several of the large Tolkien fanfiction archives were perceived to be at least somewhat in competition with each other.[9] Canon compliance was regarded as important, and fanfiction was viewed by many as a means to improve as a writer.

The SWG, in many ways, responded to and resisted aspects of this culture. For example, the group's policies were written in opposition of the idea that fanfiction groups needed to view each other as rivals. For instance, while some groups strictly forbade advertising events sponsored on other sites, the SWG encouraged it. The Connectivity component of the group's seven-part mission, for example, states:

Connectivity. To recognize that we are only a single small group in a vast online Tolkien fan community and to work toward connecting and sharing with the Tolkien fandom at large, as well as aiding members in finding groups and resources that meet their needs where the SWG cannot.[10]

Like other sites built during this time period, the SWG did not include any form of gatekeeping.[11] Multiple components of the group's mission, for example, address welcoming and supporting newcomers, both to writing and Tolkien's world.[10] Likewise, the Site Etiquette includes multiple examples of language intended to protect and support its authors, including new writers.[12]

One of the oldest features of the SWG is its challenges, which began in September 2005 with its Strong Women challenge.[17] Initially, challenges ran monthly--sometimes two per month--and were created by Dawn Felagund and digdigil. In 2009, challenges switched to a quarterly format. At this time, challenges were typically written by Rhapsody and Dawn. According a brief history presented on the SWG's Challenge page, as available through Archive.org, "Challenges were always entirely self-directed: You did not have to sign up, post your work by a certain date, or meet any other requirements."[18] 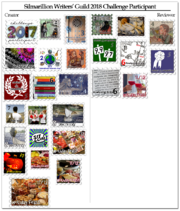 An example of a stamp collection created for an SWG challenge participant.

In 2017, several major changes were put in place for the challenges, mostly due to poor participation. Most months, no one was completing the challenges. Discussions among the group moderators identified that the challenges weren't being widely promoted, and the open-ended nature of the due date created low pressure for people to participate, which often meant that they simply didn't participate. In addition, the moderators wanted to experiment with more diverse challenge formats. Beginning in January 2017, challenges returned to a monthly format with more effort to promote the challenges independently of the newsletter. Challenges used a variety of formats, such as assigned prompts, prompt generators, and bingo cards, as well as formats that more closely matched the format of the group's challenges to this point. Challenges more explicitly encouraged creators of fanworks other than fanfiction to participate as well. Participants also received a stamp for participating. Stamps were available for creating and commenting on fanworks made for that month's challenge and were put together in an annual collection that was displayed on the member's profile. With the stamps came deadlines for creating fanworks. Although challenges technically never closed, a fanwork needed to be posted to the SWG archive by the deadline to receive that month's stamp.[4]

Participation rose after the changes. The first challenge under the new format, Taboo, received twenty-three fanworks created for it. While this number would prove to be high, during 2017, an average of fifteen fanworks were created for each of 2017's eleven challenges.

As of November 2019, the challenge format remains the same, and participation remains high, although not as high as in 2017. Challenges are created by Lyra, Grundy, and Dawn with input from the rest of the moderator team. While formats vary, each year includes one bingo card and one Matryoshka challenge, and at least one challenge each year includes music and at least one includes images as prompts. Challenges often contain a deliberate social justice component to encourage fanworks about marginalized groups (e.g., A Woman's Sceptre, Breaking Boundaries, Hidden Figures). Each January is an amnesty challenge where participants can create for any of the previous year's challenges (and receive stamps they missed), and November and December are combined into a single challenge.[17]