Sherlock the Demon Hunter is a slash Sherlock/Supernatural novel by Lady Ra. It was originally online, and has possibly been lightly edited. 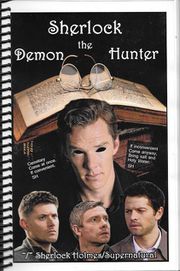 Summary from Agent With Style: "While accompanying John Watson to a conference in Massachusetts, Sherlock Holmes is spending his evening alone — the last thing he wants to do is to have to play polite with any of the conference attendees at the final reception.

As he goes out for a midnight stroll, he comes across Dean Winchester digging up a grave, and the next thing he knows, he's battling an angry spirit, trying to keep both himself and the annoyingly mouthy hunter alive.

Dean isn't as appreciative as Sherlock seems to think he should be, but when John joins them after an urgent text, John is irritatingly calm about the idea of the supernatural, and Dean sees in the doctor a kindred spirit that he definitely does not find in Sherlock.

Unwillingly, even when Castiel appears out of nowhere to approve of the three of them joining forces, Dean takes them on the road, where Sherlock finds not only how large the United States of America is, but also the joy of immersing himself in a subject he knows nothing about, and the excitement of a whole new sort of game, ignoring Dean's and Bobby Singer's dire warnings that hunting is not a *game* at all.

Throughout the process, Sherlock comes face-to-face with his own hubris, with John paying a heavy price, and Dean discovers that while Castiel may be an Angel of the Lord, he's still not completely infallable — and yet all four find that love, with a little bit of encouragement, may not out of reach...."