Shared Spaces is a Kirk/Spock story by Dana Austin Marsh. 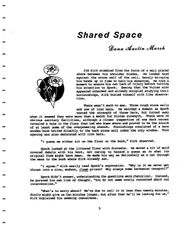 title page from the print zine 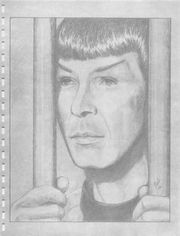 art for this story in the print zine, by DEW 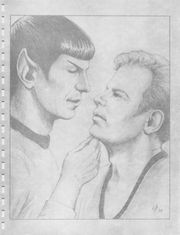 art for this story in the print zine, by DEW

From Counterpoint #3: “Kirk's confession of his love when he believes he is about to be put to death by his captors, is complicated when a last minute rescue causes confusion regarding his and Spock's true feelings.”

This is one story where having the big sex scene at the end was an asset, no matter how predictable. The relationship between the characters, and the anticipation, built so steadily that I was as anxious for the ultimate conclusion as Kirk and Spock were. Barely has the line between seemingly endless delays (which can be so frustrating) and rushing to the sex scene after a few pages (which can be so unbelievable) been traveled so successfully. And once the sex scene was reached, it was just the right length to remain consistent with the rest of the story. The one bit of trouble I had was in the beginning. I wasn't sure how Kirk and Spock could be so sure the natives planned to kill Kirk, as the native's words on pages 7-8 could have been interpreted a number of ways. (I certainly didn’t assume they meant death.) Then, once death was imminent, I couldn't imagine Kirk accepting it so easily, without even trying to reason with their jailers. Overall, “Shared Space” had an innocent, delicate aura, which I found very appealing. It left me with a good feeling. [1]

Sometimes it’s nice to read a sweet uncomplicated story — and that’s how I’d classify this one. It begins in the shared space of a cell, from which Kirk is soon taken to be sacrificed by their captors. In desperation, Kirk leaves his friend Spock with a passionate kiss to remember him by. Rescued and recovered, they hit a few bumps on their way to understanding their feelings, but only enough to make it interesting. [2]

Ah, another old-fashioned good read. Just what I needed today; have subconsciously craved for more weeks than should be. There should be no excuse strong enough, no reason compelling enough, to keep someone away from their K/S zines for so long!

The story begins lightheartedly, something I've come to expect from this author, but quickly becomes very serious when the immediate rescue from a dark prison cell that Kirk has predicted doesn't happen. Instead he is taken from the filthy space he shares with Spock and nearly killed. When he hears the guards coming and senses he may never see Spock again, he confesses his love and tenderly kisses his treasured friend. Rescue does come - as does the sickbay vigil and Spock’s angst over not only Kirk’s near miss but over his own inability to decide if Kirk’s offer of love was a panic reaction and not the real thing. Blend in the usual misunderstanding that comes when such situations try to straighten themselves out, and you have a tense set-up for the eventual realization that, hey, we really do love each other and why should we deny it any longer? Good job!

What's especially nice about this story is the slowly growing love between them after they realize both want the same thing. There’s a mission involved, but explained only to the extent it needs to be without interrupting the pleasant flow of growing attraction and the gradual learning to occupy the same quarters. There is no immediate sexual encounter, which I found refreshing. I loved seeing them gradually become comfortable with more intimate touches and the occasional kiss sandwiched in between layers of duty to the mission. When the loving comes, it is as natural and comfortable and exquisite as one could imagine. Satisfying to the nth degree...not that Spock has any interest in calculations at the end. [3]

Starts off with an impulsive we’re-about-to-die kiss, but the thing I enjoyed most about this fic was the awkward attempt at first-time sex and the way it takes them a while to get used to each other. [4]