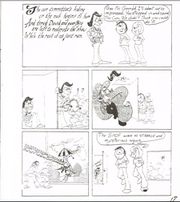 fans commenting about David Gerrold, from the SeKWester*Con 1976 program book, artist is Phil Foglio, "The SMOF work in strange and mysterious ways."

A Secret Master of Fandom (smof) is a term used in Science Fiction fandom to mean a fan of high status, great interpersonal skills, or other (positive) fame. Although the term was coined to describe negative aspects of fan attention-seeking, the word has shed its negative meaning and is now used as both noun and verb to describe the inside-baseball mechanics of the volunteer-work necessary to bring about SFF conventions. For example, "I can't have lunch with you; I will be busy smoffing for Baycon" is a perfectly cromulent sentence, where smoffing will tend to mean the invisible -- planning, programming, financial and logistical -- aspects of con-running rather than working security or emceeing an event.

Smof is always pronounced as an acronym, never spelled out S-M-O-F. Although there are certain parallels to the media fandom term Big Name Fan (BNF), the latter still tends to carry with it a negative association, as of campaigning for popularity, ruling petty fiefdoms, backstabbery, and other hijinks.

Mary Manchester deserves special mention at this point. She appeared in few publications, yet she had such an influence on Star Trek fanzines that many considered her a SMOF, or Secret Master of Fandom. Mary... would give advice and encouragement to a number of fanzine editors. Her fanzine recommendations were considered seriously by many fans, and her fanzine criticism was considered thoughtful and constructive. She spent many summers appearing at convention after convention, where she maintained contacts with Star Trek fans all over the country (and outside North America as well). A number of editors dedicated their fanzines to her, and she was very well known among those who read fanzines in the 1970s.