Save SG-1 was a site created in December 2001 to give fans info on how to save the original team of Stargate SG-1. This fan campaign to bring back Daniel Jackson was successful. 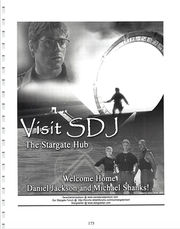 A2003 flyer printed in Heart of Mercy. It congratulates the success of the campaign.)

The site links to a tribute page by the JD Divas.[1]

Keep SG-1 Together: Get Daniel Back!

We fought to save the Stargate and the SGC - and we won.

Now we must fight to save as much of the SG-1 team dynamic from destruction as we can.

We as fans are in a unique position at this very time. Shooting for Season 6 has not yet begun and there is still time to point out to "The Powers That Be" that the interpersonal dynamics of the characters of Dr. Daniel Jackson and Colonel Jack O'Neill are a critical part of the program "Stargate:SG-1" as we know it and very probably the basis for its overwhelming success as the cutting edge Science Fiction program we have come to look forward to every week.

These two men were the main characters to make the transition from movie to television and were the life blood of the television program from the beginning of the first season of the program to well beyond that first year. The intertwining of their past and present lives, their personal development and interactions with the worlds that surround them, have often been a center point in the "history" of the StarGate Command and laid many elements that are now part of the basic arc of the program. Not to mention the enjoyment many of us have found in the sometimes light-hearted banter or deep, heart touching interactions between these two men.

It is our personal belief that the MGM program "Stargate:SG-1" will be a lesser work for the loss of Michael Shanks in its midst. We understand full well that it was Mr. Shank's choice to pursue other venues, but after reading his interview in the publication "Dreamwatch," many of us are disturbed and upset that the entertainment venues that he worked for - MGM and "Stargate Productions" - were unable to come to a middle ground in the utilization of his character.

There were over 600 Stargate fans who were told at "GateCon2001" this year that Mr. Shanks was leaving their ranks, but he was *not* leaving the SGC and would be back for occasional guest appearances. So many of us wish this to be so, but we are fearful this idea may have become lost in the corporate shuffle. That "The Powers That Be" have decided to take the easy path and reduce a vibrant Science Fiction work that challenged one's mind into just another planet bound "spin-off" that seems to be taking the easy path of conspiracy theories and Earth bound enemies rather than reaching outward to the stars -- those same stars that drew us to the wonders of the Stargate in the first place.

We collection of fans believe there is still a chance to bring the desires of others with like minds to the attentions of The Powers That Be... that we can still let them know what we want. That for the program to shine in its last year on the air all those who were there at its inception should be a part of its farewell. That the SGC's "Premier First Contact Team" needs the resources of everyone:*needs* the O'Neill-Jackson interaction to make this last season of "Stargate:SG-1" one worth watching.

Over the next few pages you'll find lists of contact information for various Coporations, Production Companies, Trade and SF pyblications, et all. Please consider taking the time to send a post card, a letter and/or e-mail to any of all of the below and let them know how you feel. Let's keep the image of Daniel Jackson: Scholar/Explorer foremost in their minds. If not for Season 6, then certainly for whatever movie venture might be in the wings. And let's point out how much better the movie will be received if we have continuity of Daniel Jackson from the last season into the movie.

We fight a race against time and every card, every contact and comment, counts more than you may realize. Please join us in this 11th Hour effort to bring *all* of SG-1 - as much as we can - back into our lives.

We all thank you for your time.

The last update to the page reads:

Actor Michael Shanks has signed for an unknown number of episodes for the newly announced Season 7 of 'Stargate:SG-1'.

I want to thank everyone who took the time to write, call or e-mail to let MGM and Sci-Fi know how much his character, 'Dr. Daniel Jackson' meant to you. And my thanks to Mr. Hank Cohen {MGM}, Ms. Bonnie Hammer {Sci-Fi} and all the others who made this possible.