Rites is a K/S story written by Jenny Starr.

It was published in the print zine As I Do Thee #6 where it was a first place competition winner. 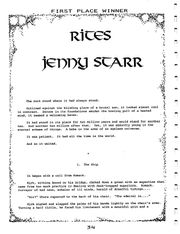 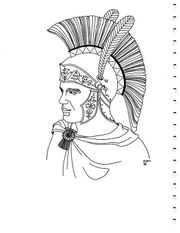 Shellie Whild's art for this story

"After he and Spock become lovers, Kirk accompanies him to Vulcan to celebrate the kaswan of Spock's young cousin who wishes to be a starship captain and does not what the bond his parents have set up."

The first place winner is RITES by Jenny Starr, a story that takes place on Vulcan and concerns the planet's lore and mysticism and reminded me not a little of Picnic At Hanging Rock", the Peter Weir film. This is a beautifully creafted, excellently written story. It's no surprise that it took first place. [1]

Face it, it's difficult for me to dislike any K/S story, which makes it quite a chore to find unused adjectives for exceptional K/S. What first hits me about "Rites" is how well constructed it is; how every sentence, though not flowery, really conveys details. Description of movements of the characters draws a very clear picture. I'm "seeing" this without realizing the author is detailing the position of hands on hips, fingers curls, etc.

Then there's the way this writer reminds us dialogue is not always needed with these two. They're the ones who make the rest of the world disappear by looking into each other's eyes, remember? So it is that their first discussion of their feelings isn't so much verbalizing as it is that audible shorthand we all know so well.

An unexpected visit, prompted by a ferry job, brings K and S to Vulcan at the time Spock's cousin is to undergo the Kahs-wan. With 38 guests due at any time, Kirk is forced to share Spock's room...and bed. Damn! Don't you hate when that happens? Nothing predictable here, though, because it is, in Spock's words, "not yet time."

Vulcan legends abound, but this one of lya Gol, or "Hungry Rock," is spooky and alluring. Tales whispered on dark, windy nights speak of children who have dared Hungry Rock by passing too near on their rite of passage. They are never hear from again except when the wind caresses the mountainside with their voices. And while this gifted child begins his journey into manhood, there also unfolds a rite of passage for a certain Vulcan and Human. So entwined with the legend is their love that it exists more as an undercurrent than the frequently depicted tidal wave.

Written as a contest entry set by an intimate scene on a lonely stretch of sand, there is no doubt as to why the imaginative "Rites" took first place. [2]