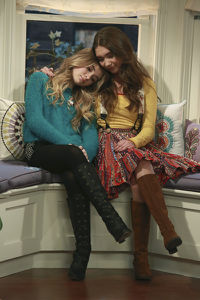 Riley/Maya is the most popular femslash pairing in the Girl Meets World fandom.

Riley Matthews and Maya Hart have been best friends since childhood, when Maya escaped her troubled home life and crawled in through Riley's window. They became friends instantly due to Maya feeling safe in that room, and have been closer than anything ever since. They're rarely seen apart, and Maya is a constant guest at the Matthews apartment, especially in the first season.

Their relationship shares many parallels to Cory and Shawn from the original Boy Meets World; Riley is the sweet, naive optimist from a near-perfect family who is obsessed with making things right for the people she loves, and Maya is the troubled rebel daughter of divorced parents who sees the Matthews family as her substitute family. Riley is particularly obsessed with making things better for Maya, and in turn, Maya is very protective of Riley. The 3rd season has Maya finally learning to hope, thanks to Riley's persistence and faith in her.

For Maya's 14th birthday, Riley gave her a set of friendship rings, one for each of them. Key points in the series show them raising their ring hands in a promise that no matter how rough things get, they'll always be best friends.

The two have only ever fought over a boy one time, a rarity for female best friends. The first-season episode "Girl Meets Farkle's Choice" had them briefly compete for the affections of Farkle Minkus, who at the time had crushes on both of them, only for them to realize the error of their ways. A season later, when Riley realized Maya had feelings for Lucas, she put aside her own feelings and encouraged Maya to go for it.

The love triangle that ensued between Riley, Maya, and Lucas ended with Lucas choosing Riley, but Riley called Maya "her extraordinary relationship" and asserted that Maya was her most important person despite her romantic feelings for Lucas, going so far as to compare their friendship to her parents' romantic relationship. The two even have pet names for one another, "honey" (Maya to Riley) and "peaches" (Riley to Maya). While they are not a confirmed couple, the series ended with both girls single, as Riley thought she would be moving to England and broke up amicably with Lucas. The final shot of the series ended with them pledging their devotion to each other and holding hands.

The pairing had a fairly-sized following from the beginning, and it grew stronger as the series progressed. There are many blogs dedicated to the pairing on Tumblr, and the tag is full of gifsets, headcanons, and text posts. The fact that Riley and Lucas decided to just be friends at the end of the series furthered the fans' belief that Rilaya was all but canon. Some fans have even clamored for Disney to make it official. Fans were delighted when Riley compared her relationship with Maya to the one shared by her parents despite the love triangle favoring Riley/Lucas (some fans had hoped the triangle would end with Lucas choosing neither and the girls staying single).