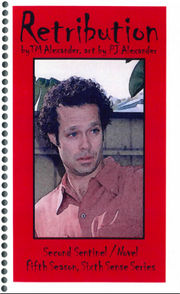 Retribution is a 87-page novel by TM Alexander with the subtitle: " Fifth Season, Sixth Sense." There are both gen and slash versions.

On the title page, this disclaimer: "Retribution is a fannish parody and is not intended to infringe upon existing copyrights. It contains homosexual content, vio- lence, and sexual violence."

The paranormal slant of this series continues as Jim discovers how closely linked he is to Blair when an enemy from the past comes seeking retaliation. Ellison also learns how far he will go to avenge his partner, and in the process uncovers a new secret about their unique bond as Sentinel and Guide that will change the course of their lives forever. [1] 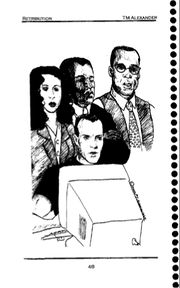 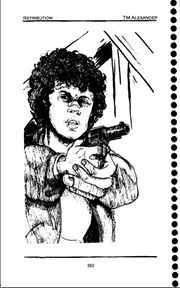 Okay, so this isn't Passages. As any writer will tell you, we change our minds as often as we change our underwear. Well, some of us do, anyway... In Gris-Gris, the first novel in my "Fifth Season, Sixth Sense" post-series series, I thought Passages would be the next book. Shortly after that I lost fifteen gig of my 21g hard drive to a virus in a disaster that taught me a very valuable lesson: make backup. Regularly. I cannot begin to tell you how much I lost and can never replace.

Then one day, I was going through some papers tacked to a note board next to my desk, and there behind the notes on a serial killer in Virginia and the RCMP station in Inuvik, I found the outline for Retribution. This was. a story I came up with a few years ago but never got around to writing. Once I refreshed my memory, a little voice in my head (the one that sometimes steers me in the right direction) said, "This should be the next novel." This change of plans brings an interesting new twist to the series. The paranormal slant continues as Jim dis- covers how closely linked he is to Blair when an enemy from the past comes seeking retaliation. Ellison also leams how far he will go to avenge his partner, and in the process uncovers a new secret about their unique bond as Sentinel and Guide that will change the course of their lives forever. Passages becomes the third novel, in which Jim and Blair must protect a John Edward kind of medium whose life is threatened by a killer who thinks one of his victims has communicated with the psychic from beyond the grave. The case allows Jim and Blair to resolve some pressing personal issues, as well. The majority of Retribution was written before the events of September 11, 2001. I had just finished one chapter in particular the day before the terrorist attacks, and was awestruck by the irony. It took me a long time to come back to it because I, like so many other people, was in such shock. When I did reread it finally, I wondered if I should eliminate that one hauntingly prophetic scene.

My decision? Leave it. Unlike Hollywood, I refuse to change the story to "protect" people from being re- minded of what happened. To me, pretending the World Trade Centers never existed, airbrushing them out of pic- tures and movies, removing posters and scenes from un- released films where they were featured, does an injustice to the victims who perished there and to their families. It happened. It is a part of life, and as Peter Gabriel would say in his song "I Grieve," life carries on.

This is the follow-up novella to Gris Gris, a gorgeous story that featured Joel and his family in New Orleans and the way Blair was brought into an amazing spider's web of voodoo and magic and - finally - love... All I can add is "Amen, Sister!". Retribution picks up a few weeks after GrisGris (note that Passages comes as the third novella in the series!), starting out with the outstanding love between Jim and Blair and the way this love has changed both men. Their world tilts though, when an enemy from the past comes back to get his revenge on both the sentinel and the guide. As always with Tami's stories, they're extremely well written - she has a way to lure the reader into an angsty, exciting world of an outstanding crime-story that had me glued to the pages the whole time. After taking a look at black magic in the former novel, this time she shows how a computer might turn into a tool for evil. And yet, when push comes to shove and the story concludes, once again it's Jim and Blair who stand together and fight for their own survival and the survival of their love. We therefore get to see feisty Blair when he has to choose between ingrained principles and his partner in every sense of the word. Once again Tami manages to include all the "minor characters" like Simon (brilliantly written, with lots of hints to the TV-show's ending), Megan, Serena and Dan Wolf (and his native American heritage) into her vision of The Sentinel. Thank God (and the printers) that the third novella was already available! Warning: It's short hair Blair, but it's growing! [2]