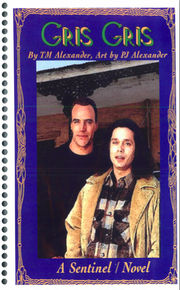 Gris Gris is a digest-sized Sentinel novel written by TM Alexander and with art by P.J. Alexander. It has both a slash and gen version. The slash version is 176 pages.

From Agent With Style: "When Blair accompanies Joel Taggert to honor the passing of a family matriarch in New Orleans, a series of ominous dreams causes Jim to follow them, where Ellion's sixth sense gets a workout in the heartland of southern Voodoo."

I purchased this at MediaWest in May 01 and put it aside for various reasons. Started reading last night and was just blown away! I actually read it straight through. I have always loved Joel and it was a wonderful treat to get a novel that really explored Joel's world. Joel has been out of touch with his family for many, many years. He gets word that a family member has died, so he leaves for New Orleans to attend the funeral. Joel has some issues with his family and has elected to take Blair along for moral support. Joel's family is steeped in the longtime traditions of voodoo. While there, Joel and Blair become involved in some sinister events. This is a first time Jim and Blair story. There is a significant separation between Jim and Blair, but it isn't one based on anger or needing space. It's just because Blair accompanied Joel to New Orleans and, well, it just really fits the story. TM does deal with some issues which arose in TSbyBS: Blair's future employment, the dissertation, etc. It may be more accurate to say she *addresses* some issues, though they are not all necessarily solved. I love the author's vision of Joel and his family. It really rings true to me. This novel involves much of the spiritual aspect of the sentinel/guide relationship. TM does a wonderful job continuing the exploration of Jim's sixth sense that was introduced in Waiting Room as well as the other more mysterious aspects of the show: shamanism, spirit guides, the merge, etc. I felt very good after finishing this. TM really succeeded in making me feel like I'd just watched a Sentinel episode or two! Sans the commercials. Plus, our guys are a couple! In TM's introduction she makes the comment that she is proceeding in this novel as if it were the fifth season premiere. She mentions that a second novel in her "Fifth Season, Sixth Sense" series is "Passages" and that a third novella is waiting to be written. I really look forward to more! Gris Gris is in itself complete, though. No cliffhangers!... [Warning:] If you mourn the loss of "Blair hair", this isn't one for you. His hair is cut against his will and left in his bed for Jim to find. [1]