From Fanlore
(Redirected from Redemption (Convention))
Jump to: navigation, search

Redemption is a fan-run, non-profit convention running biennially (odd-numbered years) and based in England. The first one was in 1999 and was held in Ashford, Kent. The convention subsequently moved to Hinckley and then Coventry, and the 2017 one has been announced as being in Sheffield.

Redemption has guests, but rather than TV stars, these tend to be episode writers, special effects, make-up, costuming, minor background actors and the like.

While originally the con was established for fans of Blake's 7 and Babylon 5, it has become much broader in scope; these days, it bills itself as being "for fans of science fiction and fantasy - in any form"[1]. There is programming on literature, other fannish film and TV (new or old), gaming, costuming, slash, and anything else people are interested in running, from belly-dancing to "science in SF" to the regular Wobblevision video-making.

Supposedly, this con grew out of the con Who's 7.

The convention started for me over two years ago. It was the last Who's 7 and Ruth Saunders had just announced that there wouldn't be another one. I loved this convention with its multitude of activities and debates. It was such a contrast to some other conventions that consisted of little more than guest talks and a dealers room.

I mentioned on the Lysator list that I was thinking of running a convention and Steve promptly popped up and said he'd be interested. Our combined convention running experience was nil.

Nothing deterred, we set about recruiting people who did actually know what they were doing. Sarah had done accounts for a couple of conventions and Eddie and Chris were old hands at the business. Ruth put me in touch with Andy Croft who was to prove an invaluable source of advice even though he wasn't directly involved with the convention.

The exact form of the convention went through several mutations. We shifted our planned date to give Deliverance more space and decided to go for a lower profile on guests and concentrate more on fan-run activities and also changed to a B7/B5 format.

We chose the Ashford International hotel after looking at several others found by a conference venue service. The Ashford wasn't the cheapest, but it did have several significant advantages. It had a level ground floor which was important when considering fans in wheelchairs; it had lots of small function rooms grouped together on the first floor; it also had a reputation (garnered from Who's 7) for friendly helpful staff. Funnily enough, the final point that decided in its favour was one that might seem trivial but was very important to us. The other hotel that had made it to our short list didn't want flyers left around the bar area. We realised that this would also extend to any kind of material stuck on walls, pillars, etc. in the public areas of the hotel. The Ashford, by contrast, had no objection to 'Vote for Servalan' posters, wall competitions with limericks, book quizes, flyers for other conventions, Klingon photos, or anything else being flyposted all over the place. These things being essential to the atmosphere of the convention, we voted for the Ashford.

We'd invited Gareth Thomas of course, and also Sheelagh Wells and Joe Nazzaro as between them they covered both the fandoms we were interested in. I was to be grateful on several occasions that I'd invited Sheelagh - she was very helpful. Jane Kilick knew half the committee already, so we invited her to share her experience of Babylon 5. David Walsh was a later addition to the guest list. He fitted in perfectly with the kind of convention that we envisioned and indeed, he was a real hit with the fans.

One thing that you worry about for the entire run-up to a convention is whether you're going to break even. Convention maths is horribly simple. If you make a loss, the committee pay it. If you make a profit, it goes to charity. Some items leave you with absolutely no flexibility at all. The hotel cost 3,700 pounds and once we'd paid the deposit we were committed. It was only a few a weeks before the actual date of the convention that we finally knew that we'd broken even. (We knew we'd make a fair bit on the auction, but none of us had any respect for conventions that use items donated for charity to balance their accounts. We had some items where we'd had permission from the donors to use the proceeds for convention funds, but charity-only items were sacrosanct.)

The most stressful point came when Gareth got a part in 'Hosts of Rebecca'. I was delighted that he'd got the part because he'd been out of work a lot over the last year or two. It did leave us short of our main guest though. I posted a message to both lists the night I spoke to Gareth on the phone (because another pet hate is conventions who keep quiet when they lose a main guest - or even, in thankfully rare cases, advertise guests whom they'd never invited in the first place) and crossed my fingers that we wouldn't lose too many members. I think it took around a month before we had another guest confirmed. It's hard to remember now. It was over Christmas, and not the best time to contact actors. I was suffering from stress-related illness, though I didn't identify it as such at the time. My nerves improved a lot when Brian came aboard. He was pleasant to speak to over the phone and Steve's report of his one-man show in London suggested that he'd be a good speaker. He'd also been unable to make Deliverance because of a car accident, so he was a cast member whom fans wouldn't have seen recently.

Things moved rapidly after Christmas. Somehow, we got the programme finalised by dint of crawling all over my lounge floor with large sheets of paper and all the programme items written on little post-it notes. Conversarions flew as we rearranged things yet again. 'You can't have that item on then as David would have to be in two places at once.' 'Hang on, you haven't given Sheelagh a lunch break.' 'Do we want two similar items close together?' 'Is Paula there on Friday evening?' And so on. That was fun. We'd been recruiting volunteers for programme items for a long time. They were a wonderful bunch, willing to get involved in everything from puppets to astrophysics. Inevitably, the programme underwent some changes as we found errors that we'd missed the first time around, but it retained its general form.

There was one horrendous point a month or so later when everything went wrong at once. Several key people had to let us down for family/job reasons. Wasn't their fault, but I had to find another disco at short notice and extra tech crew. Just to add to the fun, it would normally have landed on Chris's plate, but his job was taking him out of the country and he simply wasn't in a position to do it. I'd originally signed on to do hotel liason and guest liason and I was now doing those plus the accounts and now chasing the tech problems.

The stomach pains promptly reappeared. Somehow, everything worked out. We found the guy who'd done the disco for Who's 7 and he was available (and did a great job). More tech crew were found and God bless them they did wonderfully.

The week before the con I was stressed out, sleeping badly and trying to figure out how the devil to pack everything. The one bit of light relief was constructing the standee. We went down to Oxfam and found some clothes that were pretty much Gareth's style (denims and sweatshirt); my husband made the body from hardboard and Julia enlarged some suitable photos for the face and the all-important beer mug.

On Thursday I staggered down to Ashford and suddenly everything started going right. Volunteers were cutting out and assembling badges. Convention packs were stuffed. I relaxed. I even wrote a filk song as Deborah told me of her travel disasters. [2]

See Sector 14, the company that presented this con. 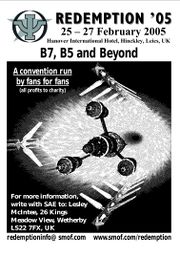 Redemption '07: 23–25 February 2007 in Hinckley, Leicestershire (the first to describe itself as a 'multimedia science fiction convention')

Redemption '17: Announced as being in Sheffield