Red Files Hard Choices is a gen Equalizer and Callan anthology. It was published in 1992 and contains 165 pages.

The front and back color covers are by Kate Nuernberg. 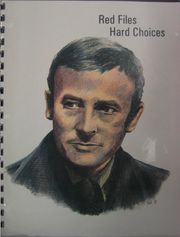 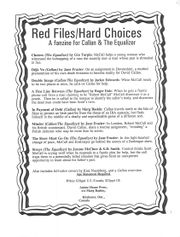 We'd like to put together s fanzine for the British spy/thriiler CALLAN, which starred Edward Woodward. David Callan was an obvious inspiration for Robert McCall, of THE EQUALIZER CALLAN has seldom or never been broadcast in the U.S., so we know this is a major undertaking -- but, one of us is a die-hard fan of the series, and very stubborn, we're looking for stories and art, of course, but we'd also like to hear from fans of Edward Woodward, THE EQUALIZER or British spy/thrillers in general who are interested in finding out more about the show. We're more than willing to bribe potential contributors with tape copies and background information! Since a CALLAN-only zine isn't likely to be possible, we're also soliciting crossovers to the EQUALIZER universe, and EQUALIZER fiction.

The flyer lists this story, but it may not be in the zine: "Choices" by Gin Turpin ("McCall helps a young woman who witnessed the kidnapping of a man she recently met, a man whose past is shrouded in lies.") (The Equalizer)]