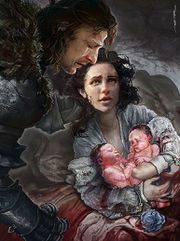 R + L = J + M was a fan theory in Game of Thrones/A Song of Ice and Fire fandom. The theory builds upon R + L = J, and says that Lyanna Stark gave birth to a mixed set of twins. Ned Stark took the boy raising him as his bastard son, Jon Snow, and Howland Reed took the girl raising her as his daughter, Meera Reed. The theory appears to be thought of by redditor MikeTysonsLifeCoach, who posted it to the r/asoiaf subreddit in May 2013.[1] Although never as popular as other GoT fan theories it did receive some traction in the fandom and garnered some media attention.[2] The theory was debunked in season six of the television series.