Professional Insight is a non-fiction 207-page compendium to the show.

It was the first publication of Pear Tree Press and supposedly premiered at Zircon in October 1990. 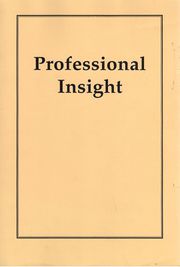 EVERYTHING YOU EVER WANTED TO KNOW ABOUT THE PROFESSIONALS... AND MUCH, MUCH MORE!!

Episodes, cast lists, synopses... that's just the start of it!

Their clothes... we note every detail.

The food and drink... we list every cup of tea!

Their likes and dislikes... we reveal all.

Their backgrounds... what little we know - we tell you!

Their flats... described in full.

Everything known about Ci5 -- the headquarters they used and all the agents and staff involved will be listed and described.

Continuity errors will be spotlighted, amid a wealth of trial facts and details you may or may not have wanted to know about!

All those lovely shots every fan sighs over. The tightness of Doyle's jeans... Bodie's back... In addition to this, we detail every exchanged smile, every frame which shows us the relationship between Bodie and Doyle.

NOTHING will escape the eagle eyes of our Watchers -- fans who will be glued to their television screens for hours and hours listing all this information for your delectation and delight. No detail will be too small to be loaded into a database programme for analysis.

H.G. and [Sara S] will publish PROFESSIONAL INSIGHT later this year. The zine will be around 150 pages in length, some pages slightly reduced type, and the binding process will be the same as for a paperback book. It should be ready for ZIRCON 90 in late October. [1]

The G.P.O. informs us that Australia does not accept printed material/small packets over gn. PROFESSIONAL INSIGHT weighs just under 600 gn. Sorry, Australia!

Because of the very competitive deal we have worked out with our printers, the first print run is going to be cheaper than any subsequent, print runs. So, the above prices will apply ONLY to those people who order the zine in advance or those who send their money after publication and pick up one of our spare copies... A few copies will be held back for sale at ZIRCON 90. Subsequent print runs make prices about ten percent higher.

If a group of fans would like to get together and order PROFESSIONAL INSIGHT in bulk, we shall be happy to quote a new postage rate for you. Please send an s.a.e. to Sara who will give you a price.

We hope to make about £3.00 (approximately $5.00) profit on each copy of this zine. The proceeds will go to the Paediatric AIDS Foundation in California. PLEASE DO NOT XEROX THIS ZINE! [2] 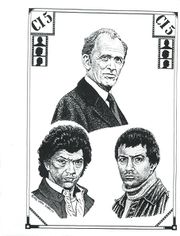 inside art by Caryl Siebbett

Although not under the banner of either Gryphon Press or its sister press, Pear Tree, Professional Insight was brought out by the same people who have worked with some of the later zines either as authors or printers or editors. This was a zine which endeavoured to encapsulate everything about the Professionals from the episodes themselves to the cars, the guns, the flats, their clothes, girlfriends, locations and what they ate and drank. Fans were given six episodes to watch and fill in questionnaires about everything they heard and saw. The questionnaires were returned to Whitehills who filled everything in on a database. Then more fans checked the episodes against the database information. It was a long, long process, but most fans enjoyed it. [3]

PROFESSIONAL INSIGHT could readily be subtitled "Everything you've always wanted to know about THE PROFESSIONALS, but couldn't figure out because your copy was too many generations down." It's impossible to say anything negative about this zine. In fact, it's difficult not to rave on and on about how much fun this zine is. Complied by 18 dedicated "watchers" who "forced" themselves to spend countless hours viewing the episodes (such sweet torturel), the zine is a wonderful guide to the episodes from a fan point of view. Providing all the data promised in the flyer, and more, the zine is also wonderful for writers who need obscure bits of Information. It's the next best thing to sitting with a group of friends and commenting on crotch shots. If you do not have a copy, buy one. You will not regret It. The people who produced this zine are to be applauded, not only for their efforts but also for their charitable contributions. As the flyer states, part of the purchase price will be donated to the Pediatric AIDS Foundation. What the flyer doesn't tell you is that even the contributors to this terrific zine bought their own copies. Thank you, everyone, for doing this zine. [4]

I have a copy now of PROFESSIONAL INSIGHTS and I must say, I'm impressed. It's a well-laid out zine, clearly typed and well bound. And it's not "cute" or kittenish as I had feared. Very matter-of-factly put out, brief descriptions of episodes, who was in then when aired, then goes into bloopers (clunkers), trivia and then attempts to show the B&D relationship by giving us key scenes and dialogue. Very handy for re-watching those terrible multi-generatlon tapes many of us Yanks have to suffer through. I find I can now hear much of the rapid-fire exchanges B&D seem to like to indulge in during the noisiest scenes possible. Good resource for the fan writer, too: who was in what, wore what, when, descriptions of flats, offices, etc. - [5]

Remember the little boy's letter? "Dear Grandma, Thank you for the book you sent me for Christmas. It told me more about penguins than I really wanted to know."

If you are anything like Cammie and there isn't more about the Professionals than you really want to know, this trivia-lover's zine is for you. Are you dying to dis cover how many episodes show Bodie eating? What actors play Lucas and McCabe? What kind of car Cowley drives? Where to find Doyle's best crotch shots? How many girl friends were named Claire? Which episode features Brian Croucher, or Pierce Brosnan? Whether Cowley ever calls Doyle 'goldilocks'? It's all here; plus plot summaries, cast listings, editing errors, nicknames, exhaustive details about clothes, guns, cars, injuries, and much, much more. So many tasty goodies one could overdose! And an excellent source for writers who want to add authenticity and continuity to their work.

I wish I could tell you how to get this zine. No editor's name or address is given. Cammie suggests you could ask a Brit; about a score of them are given credit as 'watchers' and advisors, etc. so odds are you'll hit on one. Alternately, you could ask Madame Editor; since this is her copy, she might still remember where she got it. [6]

Professional Insight for reference -- I didn't have the timne to rewatch all the episodes so it was nice to have references for dialogue, key scenes plus plot synopsiis. Wish I had something that detailed for Blake's Seven... [7]