Possibilities (Beauty and the Beast zine)

Possibilities is a het series of Beauty and the Beast novels.

Possibilities is a title like Light and Cloudshadows, except that this publication is entirely dedicated to Catherine/Vincent stories, and (with the exception of issue 1), it focuses on the first two seasons of the show. The issues will explore the couple's ongoing relationship, the birth of their son, Jacob, and their ongoing adventures Above and Below.

Summaries below are from the publisher:

Issue 1 (Only Angels Have Wings) 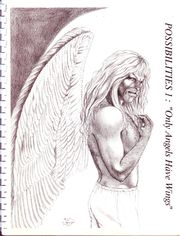 Possibilities 1 is subtitled, "Only Angels Have Wings." It was published in April 1990, contains 68 pages and is by Kim Prosser and Lisa Swope.

Thanks to her father's intervention, Catherine is allowed a second chance at life. Sent back in time she must relive the events of 'TLBL' and change her tragic destiny. [1]

Intriguing story with strong psychological insights. Involves alternate 3rd season when, after death, C is given the chance to return to the cave and try to make things come out differently. Examines the split between the bright and dark sides of V. [2]

Of all the zines I have read in which Vincent and Catherine are reunited, this one rates as the most unique. Not only does "Only Angels Have Wings" logically conclude "Though Lovers Be Lost," it also effectively explains in great depth the whys and wherefores of "Ceremony of Innocence" and "The Rest is Silence." The conflicting natures within Vincent are characterized so well that it is easy to envision both as distinctive and engaging personalities. Both are so captivat ing that we grow to love the "Dark Beast" as well as the "Bright One."

In this story, Catherine is given a second chance to live. In order to succeed, there are two things she must accomplish. The way this is handled is ingenious. Step by step, we relive the events of the two-hour movie, with actual dialogue from "TLBL." The holes are filled in, and we begin to under stand why Catherine and Vincent said the things they said, and felt the way they did in the movie. Then the whole flavor of the storyline changes with one small incident that does not occur in "TLBL."

I found this zine to be simply intriguing. The print is a little small, and there are only two drawings. However, this slim (68 pages) spiral-bound zine is word perfect, and well put together. The only thing I find fault with are some of the comments made by the editors at both the start and the conclusion of the zine. Otherwise, I have found it to be one of fan fiction's finest, and I highly recommend it to those seeking alternate endings, as well as to Beast-lovers everywhere.[3] 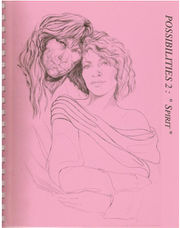 cover of issue #2, by Barb Gipson

Possibilities 2 is subtitled, "Spirit." It was published in July 1990 and contains 84 pages. Authors are Kim Prosser, Lisa Swope, Terri Blough. There is no interior art.

Fly and be free," says Vincent to Catherine after Devin's birthday present depresses him. But Cathy doesn't want to, and how can she change a stubborn feline mind? How can she even discuss it with him when he's skulked off uptop, been hit by a car, and she can't find him? Artwork by Barbara Gipson. [4]

This zine contains two stories. In one, Vincent is struck by a car and subsequently aided by a woman named Holly, sparking jealousy in Catherine. A man from Catherine's past also pays a visit which forces Vincent to do some serious thinking about his relationship with Catherine. [5]

Two superbly written stories, says reviewer. In the first, “When Fortune Smiles” by Terri Blough, V/C bathe (separately) in her tub (tub???), then spend a quiet evening in her apartment, including eating fortune cookies; in the title story, by Prosser/Swope, V/C meet an older Holly Golightly (from Capote's Breakfast at Tiffany's)-still feisty and independent. Barb Gipson cover. [6]

Possibilities 3 is subtitled, "Wormwood." It was published in July 1990 and contains 62 pages and no art.

A tale of romance and mystery, including an evil villainess. The Dark Beast gets himself into trouble; Catherine has to get him out. That's fine, until she finds herself inside a dark castle, with a living gargoyle named Nightshade who wants to be adopted by the "preeeety lady." Front cover by Barbara Gipson. [7]

This zine contains one story line in which Vincent battles his darker side who gains the upper hand by striking a bargain with an evil demon. 'Dark Vincent' ultimately realizes he is not complete without his other half and enlists Catherine's aid in a rescue attempt. [8]

Issue 4 (When the Music Stopped)

Possibilities 4 is subtitled, "When the Music Stopped." It was published in February 1992, contains 74 pages and no interior art. Front cover by Barbara Gipson. 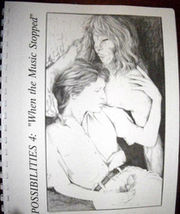 This must-have Classic novelette covers the aftermath of “Arabesque,” focusing on the problems Lisa both caused and revealed about V's inhibitions about love. As in the other volumes of the series, V attempts to come to terms with his irreverent, pragmatic, slangy Dark Side-here, a separate and intriguing character. Part of that adjustment involves giving the violence a harmless outlet: working out with a wrestler, for fun. Subplots and other developments include V's writing to Devin for advice about sex; V's stripping to discover if C will be repelled (she's not); C stubbornly learning to weave to make herself useful, Below; V's thoughts (an epilogue) about Jacob. The authors' writing, as always, is excellent; the zine is particularly thoughtful and insightful. Barb Gipson cover and sparse interior art. Briefly, back in print: if you want it, buy soon.[10]

Issue 5 (A Beast on Broadway)

Possibilities 5 is subtitled, "A Beast on Broadway." It was published in September 1993 and contains 80 pages. This zine contains some RPF.

A few short stories, one of which deals with a reporter who, a la Prof. Hughes, gets good photos, this time of C/V together, from a helicopter. Meanwhile C goes undercover as an understudy to the lead of a Broadway production of Beauty and the Beast, and V upstages a certain actor named Ron. Another story reprinted from a bygone zine. Surprisingly standard zine; no fireworks here. [11] 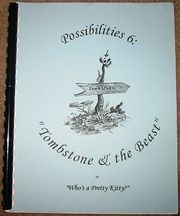 Possibilities 6 contains 73 pages and was published in March 1994 and contains 74 pages and no art. It is subtitled, "Tombstone & the Beast." Also on the cover, "Who's a Pretty Kitty?"

In this zine, V is darted and trucked off to a private wildlife park near Tombstone, AZ. Once the awkwardness of meeting his inadvertent captors (they were expecting a lion cub) has worn off, V meets big cats face to face and close up. The story is more well intentioned than gripping. There's no threat and not much conflict, except for verbal sparring between eager rescuers Devin and Catherine, and some mild jealousy between C and the park owner's teen daughter. The story's only substantial issue is whether V will agree to travel cross country in Devin's Winnebago or be crated (quicker and safer) and flown back to NYC. There are extensive tours of the park and of TombstoneÞmore like a PBS special than B&B. A whole lot more talking and reflecting than doing. Those who like education with their romance will enjoy this more than those whose sole interest is heavy breathing. [12] 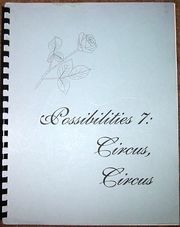 Possibilities 7 was published in December 1994 and contains 69 pages and has no art. It is subtitled, "Circus, Circus."

Unlike the rest of the Possibilities series, this zine isn't about Vincent's "Other" side, though that incorrigible wise-mouth has some dialogue from time to time. Instead, this Classic novel confronts Vincent's animality in a different way: by having it exposed to a full media "circus" after Vincent's injured rescuing people from a fire; having it doubted by his reluctant physician; and finally having it adjudicated in court, where Vincent's human rights (or lack of them, legally) and, ultimately, his life are in the balance.

For those who enjoy Vincent helpless and suffering, there's a lot of this here. For those that enjoy seeing Catherine determined and enduring against hardship and fear, there's lots of that here too. Those who've been wondering how Joe really would have reacted to Vincent get a perceptive take on that question, and fans of Elliot Burch and Devin will find much to delight them here, as well. The considerable medical detail of Vincent's illness and its treatment, in all its stages, hits a good balance, providing realistic grounding for the tale.

In a hospital, Vincent's compassion inevitably makes a difference: he's not completely helpless all the time. And he comes to a believably Vincent-ish decision after moving in with Catherine, Above, and taking on the media circus head-on. Catherine's dilemma, in the story's final section, varies between wry (of the "Name 10 reasons Vincent would be an awful live-in significant other" variety) and sober, and the story's resolution is credible and happy only if you squint a lot and skate fast. There's more angst than amour, overall, but that's always been true of this duo's approach to B&B. As a whole, it's a very satisfactory and well-written story, the best this team has produced in some time and up to their very considerable mark. Highly recommended. [13]