Photo Flash is a slash 117-page Harry and Johnny novel by Ruth Kurz and Teri White. 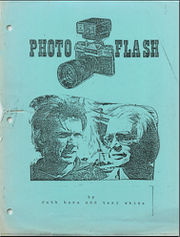 It takes place in 1973. "Christmas was never like this, or 'It's a puppy!'" The OMC, Dr. Ben Stein (portrayed by the actor Paul Michael Glaser in photos), plays a big part, and in a twist of OFC, though in photos only, not as the actress herself, Elizabeth Glaser is "Ben Stein's" wife "Miriam." The couple's two children are Paul and David, a nod to Starsky and Hutch.

There are many black and white xeroxed photos in the zine, but also some original art.

It is part of an overall arc of Harry and Johnny Stories:

Fan Casting, and Some Discussion

A fan in 2002 was outraged that this zine included a photo of Elizabeth Glaser. "What the people who put the zine together did was use artwork of PMG & DS to depict original characters in their zine. There was even one drawing of PMG with his late wife, Elizabeth!"

Another fan pointed out that "if you had taken the time to check the publishing date on those H&J zines, you would have seen that they were published nearly a decade before Elizabeth was ever diagnosed with HIV.... Elizabeth's image in those zines in no way demeaned her. Her face wasn't stuck on some bimbo's body and put in a kinky sex scene. Elizabeth's representation was treated with respect and love throughout the entire Johnny and Harry saga. She was portrayed as the PMG character's wife of fifteen years and after all that time and two kids, he was still crazy in love with her. How could this possibly be disrespectful to Elizabeth, who was loved by S&H fan long before that tragedy ever struck their family? The haracter that was based on her was one of the most loving, supportive, positive female characters I have ever seen in a fanzine... These zines were never intended for mass production and were only sold at cons because people were dying to read the latest installment in the Johnny and Harry saga. Everyone in fandom back then eagerly awaited the latest installment...and howled with laughter to see their favorite photos of the guys altered to fit whatever unlikely plot was going on. Elizabeth Glazer, Robert Redford and the other actors were all brought in because they were favorites with the fans. There was never anything bad or disrespectful done with any actor whose image was presented in those zines." [1]