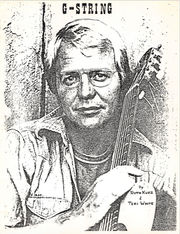 G-String is a slash 96-page Harry and Johnny anthology by Ruth Kurz and Teri White.

It takes place in October 1973. Johnny learns guitar and other things. In the story, Johnny is hypnotized/brain-washed, sexually compromised, and blackmailed while a stripper dressed as Alexander the Great.

On the title page: "More soap and sex for literary relaxation."

Included in the zine are some lyrics to Jim Croce's "I'll Have to Say I Love You in a Song."

It is part of an overall arc of Harry and Johnny Stories: