Phanwank was a livejournal sporking community focused on mocking the Phantom of the Opera badfic, though it also had discussions on other phandom-related topics. The peak of its activity was in the mid-to-late 2000s, so a lot of discussion was centered around the 2004 adaptation and fanfiction that was based on it. Its members often discussed and pointed out many tropes and cliches that were popular in the phics of that period.

longlostblue, the moderator of Phanwank, described the typical kind of fic that got "wanked" in the community:

Owing to the ending of the Phantom of the Opera story, in which Erik, the Phantom, is left alone, it is perfect for authors to insert their own characters as Erik's love interest, most of which are Mary Sues. These authors also create their own unrealistic and out-of-character ideal of Erik, in which he is handsome, caring, misunderstood, and falls deeply in love with the Mary Sue. Therefore, many of the posts on the Phanwank community are about badly written fan fiction. A very common method of "wanking", as they call it, is to post a chapter of the story, and insert their own comments in bold. In some cases, when they find a story that they think too funny to be commented on, they simply say, "It wanks itself."

Fan fiction seen on Phanwank generally follows a certain format. Erik, lonely and lovelorn after Christine has left him, somehow meets up with a female character, almost always a Mary Sue. The OC (other character) is young, beautiful, kind, innocent, and usually a talented singer. There is an obligatory scene in these stories in which Erik gives her a voice lesson. It is also common for the OC to have a sad and traumatic past, and the OC never has any fear or disgust regarding Erik's deformity. Of course, in most of these stories, Erik is extremely handsome except for a small portion of disfigurement. The author tries to make readers believe that the OC is the only one who can truly understand Erik. [1]

Those tropes were often referenced in the sporkings and the snarky community tags and featured in humorous fanart made by community members.

The community developed many inside jokes and references, many of which were based on bad spelling and characterization in the discussed fics.

One of the most famous inside jokes on Phanwank is "Roule's ingenious plane." This was taken from a badly written piece of fan fiction, in which the author misspelled many words, and meant to type "Raoul's ingenious plan." In Phanwank, it is very common for members to describe things as ingenious, or to mention Roule and his plane. In the same story, the author referred to Erik as having "pink kissable lips". [snipped]

Other inside jokes include Erik's wonton goddess, duggins, department of redundancy department, angle of music, Erique is one with teh whalez, daddy!Erik, the Canon Cannon, and angsty Erik. [1] 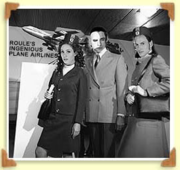 manip based on the "Roule's Ingenious Plane" meme

The badfic tropes and inside jokes of the community eventually lead to creation of Sueniverse, a humorous RPG featuring Mary Sue characters and crackfic versions of characters from other fandoms like Aziraphale and Herbert von Krolock. The board where the RPG was posted (inaccessible now) was created in 2006. It has its own wiki Encyclopedia Marysuenica.

In May 2005, a Live Journal community called We Hate Raoul was created. Posts in that community consisted of members dicussing their hatred for the character of Raoul and extreme love for Erik, also bashing Christine for choosing Raoul over Erik. Members of Phanwank spammed the community, posting pictures of the ugliest version of Erik, played by Lon Chaney in the 1925 silent film, along with exaggerated comments to mimic the bad spelling and attitudes of some Phantom fangirls. This spamming is referred to as The Great We Hate Raoul Raid. [1]