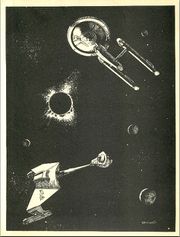 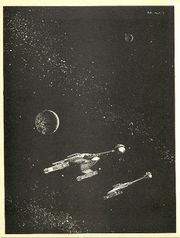 back cover by Mike Brown

Penumbra is a 98-page gen Star Trek: TOS novel by Michele Arvizu. The covers are by Mike Brown and the interior art is by Ann Crouch (one piece is reprinted as the cover of Interstat #41. This zine was originally to have had art by Sat Nam Kaur Keahey. It includes some poetry by Barbara Tippery.

A special thanks to Karen Bates for her outstanding job of proof-reading PENUMBRA on such very short notice. And to Ann Crouch, who dropped all in the closing days just before press, to illustrate PENUMBRA.

PENUMBRA IS DEDICATED TO: Teri Meyer, who worked as hard as I did and whose boundless encouragement is beyond measure; Mary Lou Dodge, for her generous and accurate suggestions; Jacqueline Lichtenberg, for her early support; and Gene Roddenberry, for creating three glorious characters whom I love very much.

Summary from a listing in Datazine #4: "A full-scale Klingon invasion serves as background for this real test of Kirk and Spock's friendship."

Excellent piece of writing and it really packs a wallop. [1]

Klingons have a famine on their hand at home and this causes them to start raiding and pillaging in Federation Territory. Meanwhile on Vardosia, a religious fanatic takes over and holds all Federation people hostage until some former leaders are returned to be tried. (Shades of Khomeni!) Spock is agreed on by both sides to arbitrate the dispute. When he gets there, he is captured by Klingons and isn't reunited with his friend, Kirk, for a year and a half. However, there is no joyous reunion. Spock cuts Kirk cold. What could possibly break the bond of friendship that Spock has always shown? This is a novella of emotion, the adventure is only the setting, a searching into what friendship really is. While I disagree violently with Michele's reasons for Spock's disillusionment (her logic escapes me on the examples she cites for it), and sometimes the people seem out of character, she has written a very vivid, searing breakdown of a relationship. How two people living the same experience can see it so differently. The artwork is excellent. [2]

I would venture to say that one of the most common failings in Treklit (or any amateur writing, for that matter) are 1) the tendency to conceive cliches and see them as bolts of inspirational originality, and 2) the ability to come up with insightful ideas without being able to make them come alive on paper. In 'Penumbra,' I was delighted to find that Michele Arvizu succumbed to neither of these. Interspersed throughout the action are thought-provoking tidbits of characters' feelings, memories and reactions that are extremely pleasing in their apt freshness. It takes more than a typewriter and the desire to create black marks on white pages to make a writer. It takes a spark of creative genius, and in 'Penumbra' I see evidence of that spark in Michele [3]