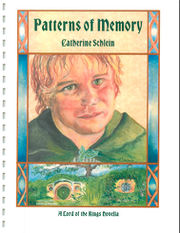 Patterns of Memory is a gen 114-page Lord of the Rings novel by Catherine Schlein in 2006.

The only interior art is one small piece at the end.

On a trip to Port Evenstar (the new port on the Brandywine), Sam disappears. When he's found, he cannot speak and his mind is locked in some fell madness. Frodo takes him home to the Shire to try to heal, but after a year, Sam is getting violent and Merry and Pippin come to help, but get a surprise instead. Can they find who did this to Sam and why? Their quest takes them to Pelargir, where they meet up with Aragorn, Legolas, Gimli and others.

This universe has rather gotten out of hand. I started with writing a short story to solve some of the problems I felt the ending of the movie caused by not having the razing of the Shire. Now, don't get me wrong, I understand why P. Jackson left it out (not another ending!) but it left the four hobbits in a very different place than in the book. They returned to a Shire little changed from before, but they were changed. Also, I wanted to have Frodo back. As a fan writer, I can do that.

It is not necessary to have read the previous stories, but here's a quick synopsis of the universe. Frodo, after eleven years in Valinor, moves out to the shore after Bilbo passes on to the green country of his ancestors. There he lives in the small village of Nimrondale. The Ringbearer is quite well, but restless. He becomes friends with two elves, Alisgai (a tavern owner) and Artemas (a bard who has his own problems). Neither are happy in Valinor, either.

At this time, due to changes even the Valar do not understand, boats again begin to come to Valinor bringing Elves from Middle Earth, but they also return to Middle Earth. Pippin discovers this (it's a secret the Elves try to keep) and sends a letter to Frodo. Frodo responds, with one request-do not tell Merry or Sam of the letters. Pippin keeps the secret until a plague hits the Shire. Sam loses most of his family (only Elanor survives) and is devastated. Unable to deal with his grief, and pulled to Valinor by Frodo's presence, Sam takes his daughter to Gondor to become a lady-in-waiting and leaves for the Grey Havens. Meanwhile, Pippin tells Merry of the boats and his letters and, feeling that Sam needs to stay in Middle Earth, the two journey to Valinor to speak to Frodo.

In the end, Frodo returns to Middle Earth with Merry and Pippin and his two Elven friends, Artemas and Alisgai, and is reunited with Sam. Sam is prevented from leaving Middle Earth by a devastating earthquake (the last remnants of the Ring's vengeance) and the four hobbits take the vanguard in restoring the Shire.