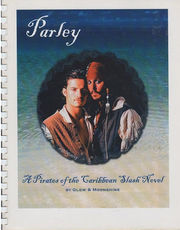 Parley is a 125-page slash Pirates of the Caribbean novel by Moonshine and Glow ("Aphra Behn"). It was originally published in La Chair.

"This zine will not be sold to minors."

This zine has a sequel, Matelotage.

It won a special 2005 Huggy Award, along with the award for Mixed Media: Best Zine - La Chair. It also won the 2004 Fan Q Award for Best Pirates of the Caribbean Story, Slash and the 2003 SIZZLER Award.

From the publisher: "A missive from Governor Swann informs Jack Sparrow that William Turner has gone missing. With the trail long cold, Jack seeks clues from an unconventional source—or perhaps not so unconventional for a man who owns a compass that doesn't point north. Unfortunately, despite the best efforts of the Black Pearl's captain and crew of jolly jack tars, when Jack finally finds his lad it's almost too late..."

'The Twenty-first Century could easily be labeled the century of the forgery. So obsessed have we become with the past that no amount of scholarship could possibly keep up with the desire for written words not of our own time. And as is common when want exceeds demand, the market will, as a matter of course, find a way to fill the need.

As evidence, I draw your memory back to the infamous "Hitler's Diaries" scandal of 1983. West Germany's Stern magazine distributed over two million copies of its issues containing the poorly forged diary and the world's media, such as the London Sunday Times, the New York Times and Newsweek, went along for the merry ride—while it lasted. That these and other forgeries were taken as true by press hounds and doubting scholars alike goes to show that the success of a fraud often has more to do with the people's desire for the past, and a measure of dumb luck, than the sly maneuverings of the forger.

Why do I bother to bring such forgeries to mind? For no other reason than if had not, you, kind reader, would have. The forthcoming text was taken from a parchment letter and accompanying manuscript — both purportedly found in the floor of Westminster Abbey during repairs. Unfortunately, the letter and manuscript were stolen from the London conservatory where they were to be examined. More fortunately though, a transcript was completed before the disappearance of the originals.

For years the singular tale languished on disk as other seemingly more fruitful endeavors were investigated—and who could blame the conservatory staff? Overworked and under funded, there were hundreds, no thousands, of manuscripts demanding attention. How could this unlikely little story—long assumed to be a hoax—hope to compete for attention?

I worked as a volunteer in this particular conservation lab for two summers, performing the sort of menial tasks that are so important to cataloging, yet often languish for want of a pair of available hands: photocopying, filing, and cleaning up the electronic database. It was late at night (I loved the night shift, when no one was around and I could, in my Walter Mitty-esque way, pretend that I was the vaunted scholar I dreamed of being) that I came upon a certain transcript concerning piracy and the Caribbean. I completed no other work that night, but instead absorbed a story that has haunted me these last twelve years.

Eventually, I completed my studies ... I now teach history at a small Midwestern college. But in all the time that has passed since my London internship, I never forgot the midnight tale I read. For the last three summers I have visited my old stomping grounds at that selfsame London conservatory. Each time I have asked for, and received, permission to search the data base for that tale I read so long ago ... each time I have failed to find it.

So, in the best early modern tradition, I present to you a memorial reconstruction, wherein an individual reproduces a particular work from memory—a device that has gifted the modern world with at least two Shakespearean plays that would have otherwise been lost to us. Additionally, I have standardized the

spelling and taken other, minor, liberties (such as including contextualizing quotes) in order to present the story clearly to a modem audience. And, of course, lacking any sort of evidence to support my claim of authenticity, I am forced to publish this tale not only as fiction, but anonymously and in a venue far removed from my academic circles. But there is nothing fictitious about the love found in this tale ... I hope it touches you as much as it did me. -- the author