Overnight Sensation is an X-Files MSR story by Syntax6. 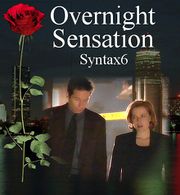 All of Syntax6's casefiles are well worth reading, but this is my favourite of the lot. In wintery Boston, Mulder and Scully try to catch a serial killer while handling that traditional threat to police investigations... press coverage. When Diana Fowley shows up and joins the investigative team, things get even more complicated. Beyond the usual fannish details, I was impressed by how well the local police officers are drawn. You get the feeling that they could carry a story on their own, which is nice. [1]

When we here at @txf-fic-chicks (@kateyes224 and @piecesofscully) recently learned that one of the most prolific and widely renowned writers in our fandom’s history joined the dumpster fire that is Tumblr, we were shocked, a little starstruck, and wondering if we needed to tidy up around here. But honestly, we couldn’t be happier. Syntax6 has written some of the best casefiles and AUs our fandom now hails as must-reads, so we were hardly surprised (and thrilled to bits) to find out that she is now a published author.

So to celebrate Syntax6′s arrival here on Tumblr, we’re featuring one of her best casefiles. Tonight’s read is a Season Six thriller about a serial killer terrorizing the streets of Boston, but as usual, Syntax6 ratchets up the tension in her own unique way. In this story, Scully is struggling with whether to leave Mulder and the X-Files when she’s given the opportunity to take the lead on this case and is subsequently farmed out to Boston P.D. to lend a hand. Syntax6 also throws in a cast of original characters that we come to really care about, and she brings back some of our old favorite secondary characters, including Diana Fowley, who serves as a foil for MSR and turns up to meddle in her sly, self-serving way at the worst possible moments.

This is a fast-faced whodunit that somehow manages to neatly gather the many loose ends of the story up in a tidy bundle but will have you scratching your heads and balancing on the edge of your seat until the last possible moment.

Now that’s what we call talent. Welcome to Tumblr, @syntax6. [2]