From Fanlore
(Redirected from One Punch Man)
Jump to: navigation, search

One-Punch Man is a Japanese superhero webcomic created by ONE. One-Punch Man tells the story of Saitama, an extremely overpowered superhero who has grown bored by the absence of challenge in his fight against evil and seeks to find a worthy opponent.

The original webcomic is drawn in ONE's signature simplistic, unpolished style. A digital manga remake of the series, illustrated by Yusuke Murata, began publication on Young Jump Web Comics website in 2012. An anime television adaptation by Madhouse aired in Japan between October and December 2015.

Saitama, the protagonist, is a bald-headed 25-year-old who became a superhero "for the fun of it," but finds no fulfillment through it. He is bored of fighting because he is effortlessly able to defeat enemies with a single punch. The origin of his abilities is left ambiguous. He has little interest in his public image and struggles against the bureaucracy of the Superhero Association. Saitama gains a pupil in Genos, a cyborg who is on a revenge quest to find another cyborg that slaughtered his entire family and hometown.

One Punch Man is popular for its humor and subversion of common anime and superhero tropes.

Genosai (Genos/Saitama) is the most popular ship by far. Fandom often focuses on Genos's idolization of Saitama - he calls Saitama Sensei, asks to be his disciple, and moves into his apartment to learn the secret to his immense strength. 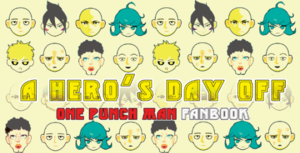 art from A Hero’s Day Off