One Damn Lucky Bastard is a K/S story by Brianna Falken. 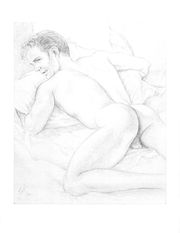 artist is Deeb for "One Damn Lucky Bastard" -- "Well, if you want to get your heart rate up, look at this picture, which accompanies Brianna’s story. It shows Kirk in a wanton, inviting pose. He’s on his stomach, left leg drawn up a bit, testicles partly shown, and arms clutching a pillow as if to brace himself for what is to come. (Ahem.) Very erotic picture. It does not perfectly illustrate the action in the story, since Kirk is on his back when Spock takes him there, but the way the story is going, I’m sure they’ll get around to this position soon!" [1]

It was published in the print zine First Time #38.

From the publisher: "Kirkʼs unremembered wet-dreams hold the key to the continuous retransference between himself and Janice Lesterʼs body long after she should have been able to cause it."

"Soft green-gold eyes opened to meet dark brown velvet. "I love you, Spock," Kirk breathed. "I think I always have." "I too, until death and beyond," the deep baritone whispered. "Know this also, Jim. Although I would love you in any form you happen to inhabit, I prefer you as you are, in all your masculinity. For you are beautiful so beautiful you make my blood burn as no woman, Vulcan or human ever could."

I found this quite entertaining and it made exceptionally good use of an episode—"Turnabout Intruder"—without boring me with details I already know. Kirk was very mature in dealing with a difficult physical problem and then with an emotional one: finding out something about himself he wasn't certain he could deal with. Spock and Bones are there to help and both are well portrayed and partake of some very realistic dialogue. [2]

The author meets the atmosphere of the series perfectly. The dialogues are vivid and with a good sense of humor. And that sex-scene is... hmm... terrific. All things considered it is a very nice story. I have one quibble: is this sex-scene really "first time"? In my eyes they act like a pair that is a very long time together. Though both men are experienced, I can't imagine them this uninhibited and open, when they are together for the first time. [3]

"ONE DAMN LUCKY BASTARD" is Brianna Falken's first published story. It's a 20 page story set close to the Janice Lester episode. Overall, it's a wonderful beginning for Brianna, and I'll look for more of her stories. If I didn't know it was a first story, I'd probably not be as impressed as I am. But even not considering this, I'd say it certainly was a better than average K/S story for anyone.

I think Kirk gets overly excited too quickly. There's not enough foreplay. At the beginning of page 59, Kirk is humiliated because he thinks Spock doesn't return his desire. By the end of the same page he is writhing rapturously and begging Spock to touch him.

Lots of other writers have the same problems, so I probably shouldn't call undue attention to this.

Brianna is ambitious in her plotting. She's trying to make it logical for the two to get together, and it does take her 17 pages before they actually do have sex. This isn't just another Kirk-as-Janice-finally-sees-Spock-as-a-lover story. This story has some different twists. Some of the dialogue is quite nice. And there is a lot of dialogue, something which I like in a story. One part I liked was: "Yeah, you fuck your brains out. I've noticed, without a certain amount of envy, I might add," McCoy grinned lecherously.

When it came to the dialogue during sex, I thought (highly subjective opinion here) Kirk talked too much and sounded very feminine. But then this has to be about the hardest part of the story to write, and very few writers (male or female) do this well.

The title is catchy, and the story starts off with a "bang". It moves along at a reasonable pace, up until the end. I'm awfully glad she didn't rehash the actual Lester episode. I thought she handled that quite effectively in her story. She made her points without wasting time. It ends happily on a very upbeat note. I like endings that effectively close the story by tying the end to the beginning and/or title. [4]

Nicely structured scenes with a good series feel and direct dialogue, nothing fancy or overblown. Included is a very good characterization of McCoy- gruff, yet sensitive, professional and bantering with Spock.

Excellent explanation of the "Psyche Vid Scan" which lent a touch of realism and helped to set the time period.

A few problems: 1. K and S dialogue on the bridge in the beginning. I feel very strongly that the bridge is an inappropriate place for Spock to inquire about a personal problem not relating to any danger to the ship or its command. This also applies to Kirk's rather personal teasing of Spock. However, nice touch to have Uhura's POV and comment on the interaction, 2. I don't believe that Kirk would allow or want McCoy to speak to Spock first- Even if he would, which he wouldn't, it's not as dramatic as Kirk confronting him. 3. We should have been shown the dreams-Without them, we are left wondering what they were and the impact is greatly lessened. 4. A bit too much talk with McCoy and Kirk- Instead of the doctor sitting Kirk down and explaining everything, perhaps it would be more dramatic to have it fill Kirk's thoughts and dreams.

Also, even if I don't totally agree, it was a very well-thought out premise of Kirk wanting to be a woman in order to love and be loved by Spock. But overall, this new writer has really avoided lots of new writer pitfalls and did a wonderful job of recreating the series feel. [5]

I’ve been meaning to write a LOC on one of Brianna Falken’s stories for a long time. Her latest story, “Thicker than Blood” in Within the Mirror 14 reminded me again of how much I love her writing. There were some excellent LOC’s in the KSP done on that story, so I decided to write a LOC on “One Damn Lucky Bastard”. This was the first Brianna Falken story I read, and her name immediately went on my “Must Track Down Everything By This Author” list. I have since found and read everything Brianna has written, and enjoyed all of her stories, whether regular ST universe stories, AU stories or Mirror stories, but this first story of hers remains one of my favorites. It has all the hallmarks of her stories: an interesting and unusual plot, excellent writing, enjoyable characterizations of Kirk and Spock, good dialogue, and really hot love scenes!

The story starts out with Kirk having wet dreams at night, but not remembering them. He knows they are wet dreams because he keeps waking up with the evidence on his body. They bother him a lot, and disturb his sleep, so he finally talks to McCoy. After trying everything else he can think of to unearth the dreams Kirk is having, McCoy conducts what is called “The Psych Vid Scan”, which can delve directly into the mind. Before he or Kirk can look at the results, the Enterprise is called to Camus 2. The story then switches to after the episode, but while Janice Lester is still on board. Kirk keeps waking up and finding himself in Janice Lester’s body, and is puzzled over why she is able to continue the transference long distance, with no equipment. Unbeknownst to him, McCoy has an idea as to the cause—he analyzes the results of the vid scan, and find that, as he suspects, Kirk’s wet dreams were about Spock. And he theorizes that is what is causing the transference. Kirk can’t accept that he is in love with Spock, so has deeply buried the feelings. Kirk loves Spock, but as a woman, it would be more socially acceptable for Kirk to be with Spock. After the transference, and the mind meld with Spock, Kirk’s subconscious mind and Janice Lester’s mind want the same thing - to switch bodies. In the story, McCoy theorizes that the link between Kirk and Spock was not completely dissolved, so that’s why when Kirk falls asleep and dreams of Spock, Janice Lester uses this as her opportunity to effect the transference. Afterwards, Kirk’s subconscious mind initiates the transference. I thought this was a really unique story. It takes elements of the episode (like Spock holding Lester’s hand when trying to escape, and Spock holding Lester’s head during the transference while they are in the brig) and now they make perfect sense in the context of this story. And the story is written in a very exciting manner—I stayed up far too late the night I read it because I had to know how the author worked it all out for the happy ending we know that the First Time zines require! I loved how she has Kirk (who is now Lester) attacking Spock the first time the transference occurs, and Janice Lester (who is now Kirk) racing to the rescue. And the small touches like when Kirk is in Janice Lester’s body again he holds Spock’s hand once more. McCoy convinces Kirk to tell Spock how he feels, but agrees to speak with Spock first, and show him the vidscan results. (Apparently the thoughts of the person being scanned play out like viewing a movie.) The story ends with a great scene in Kirk’s cabin. Spock comes to Kirk, admits McCoy discussed the whole situation with him and he viewed the vidscan. Kirk is convinced that Spock will be insulted and disgusted, so asks Spock to leave and turns from him. Then there is this great paragraph that starts the love scene. (I wanted to nominate it for The Best Of section, but didn’t know what to call it, so decided just to quote it in my LOC): “He remained where he was, waiting for the sounds which would indicate Spock’s departure. Only silence met his straining ears. Suddenly two warm hands came to rest lightly, one on each shoulder. Kirk didn’t move—couldn’t. The body behind him was just close enough so he could feel the heat radiating against his back, and ass. A quick intake of breath was his only response as he heard the rustle of movement and felt a hot, moist tongue start to trace the outline of his ear. Shudders racked his body as the gentle assault continued. The long pointed tongue probed along every crease and crevice, finally delving into the inner recesses, as Kirk moaned in pleasure. The delicate tormentor retreated. As he shivered at the loss of the exquisite touch, Kirk felt a hot mouth trail wet kisses down his throat. Groaning, Kirk attempted to turn, to embrace his seducer, but was stopped by the sudden tightening of the hands on his shoulders. ‘No Jim. Remain as you are,’ a low thick voice breathed against his neck. ‘They didn’t disgust you?’, Kirk whispered, as the hands slid slowly down his arms. ‘Disgust? No, they did not disgust...intrigued might be a more accurate assessment. Now lean back, Jim,’ Spock murmured throatily.”