Once Upon a Time (A Fairy-Tale Love Story)

Once Upon a Time (A Fairy-Tale Love Story) is a Kirk/Spock AU by littlebirdtold. It was written for ksadvent and the fanart for this story is by soliandxpyne, the title of the art is "SnowGlobe".[1] Both summaries are by the author. 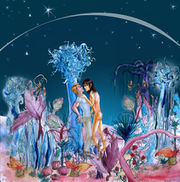 SnowGlobe by soliandxpyne. The picture is an illustration of the scene in the garden where Kirk first meets feral Spock.

Summary: "In a universe with no Federation, where First Contact never happened, Jim Kirk is your average popular guy. On Christmas Eve, thanks to a series of strange events, Jim finds himself in a parallel universe where the Milky Way is under the control of an alien race and ends up as a servant in the residence of the Royal House of Vulcan. As he starts adapting to his new life, Jim's curiosity fucks everything up—but hey, Vulcans shouldn't have told him that he isn't allowed to enter this wing of the palace; Jim has never been good at following rules."

Summary 2: "This is the story of how Jim Kirk became a Princess ("Prince Consort, Bones!") of the United Planets of Vulcan Kingdom."

Q is Santa (it's his punishment!), which explains how Jim ends up in a parallel universe. The story uses the Pon Farr trope.