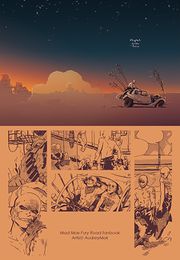 Night Like This is a fanzine that focus on character Nux and Slit as they grow up together in the brutal army/cult to which they belong. While not explicitly shippy, it can be interpreted as Nux/Slit, as the stories revolve around the two War Boys' close relationship.

"Everything about this fanzine is beautiful. There’s something in kotteri’s artwork that captures the pathos of the characters, gives them a dignity and and even a sweetness despite their brutal circumstances (and actions). Each of the stories is touching, but I think my favorite is the one where Nux sews up Slit’s cheek after he’s been injured.

So the MMFR fandom has all sorts of different explanations for his scars. In this one, a young Slit already has a scar on one side of his face. I totally agree with this headcanon - god, it’s so sad and awful to think someone cutting through a child’s face like that. And god, what does that do to a person? And to think that it happened to him twice? Anyway, so back to the comic: Nux finds Slit is at the organic mechanic after his second terrible injury. The scene is sad, but poignant - Nux takes the needle and thread, and sews his partner’s face back together.

The War Boy system is righteously fucked, but there are bits of their humanity that their society hasn’t yet stripped away. And kotteri’s art does an amazing job at showing that."[1]