For other fanworks with a similar title, see New Beginnings. 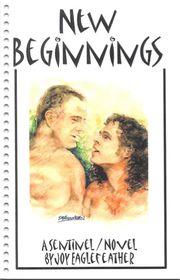 New Beginnings is a 146-page slash Sentinel novel by Joy Eaglefeather. The art is by TM Alexander.

Summary from the publisher: "Blair gets his due. His thesis has been literally stolen from him -- a lawsuit just waiting to happen -- and he wants justice!"

A fan warns for a short-hair alert.

Introductions from the Zine

From TM Alexander, the publisher:

This is the first novel by Joy Eaglefeather, but not her first work of fanfiction. I first met Joy through Mulder/Skinner (X-Files) fandom, when I advertised for submissions to a one-shot zine entitled seXFiles. Joy sent me a story dealing with dreams and subliminal messages. I felt she did a great job for a new writer.

A fine friendship developed from there. We see each other every May at MediaWest*Con, every other year at ZebraCon, and at our own SentiCon in March. At these times, she has always been a wonderful help in the final stages of zine production. When she told me she had started writing again, I was thrilled. When she told me how long it was, I told her she could be looking at a novel that could debut at ZCon. This gave her the impetus to finish. I am proud of her for this accomplishment, and hope she will write more. I love her treatment of Jim and Blair, and her inclusion of characters one rarely finds in Sentinel fanfic. I think readers will find the right balance of good story, characterization, and mysticism for which the show was known...with that special "relationship" spice we slashers have always craved.

It is my honor to be editor, artist, and publisher for this novel. Thank you, Joy, for the privilege.

WOW! My first novel! I can hardly believe it!

This story started out to give Blair his due. I mean, the man had his paper literally stolen from him. It was a lawsuit just waiting to happen. So I decided to write a story for Blair, so he could vent his anger and get some justice! Like the Energizer Bunny, the story kept going and going, unlit it became the zine you have here, I have written short stories before - in Quantum Leap (gen & slash) and in X-Files (published in seXFiles). This is my first foray into The Sentinel. I want to thank two of the most generous people in the world: Tami Alexander, for being a wonderful friend and encouraging editor. If my story is any good, it is due in no small part because she graciously helped me out, giving my story wings to fly when it plodded. Tami, I love you dearly for your help and encouragement! The other person is Paulie Alexander - Paulie, you have made me laugh so much over the years. I love you dearly for this and allowing me to be The Presses' "slave." I have had so much fun over the years helping you put zines together and manning (or is that womanning?) the dealer table.

I hope you enjoy this story as much as I enjoyed writing it.