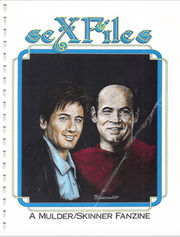 The art is by KOZ, Seraph, and Angi Towski.

The zine has an age statement and is not to be sold to anyone under the age of 21.

detail from the dedication page: a manipulated photo of Mitch Pileggi, David Duchovny, and Chris Carter looking at a copy of this zine, and Duchovny exclaiming, "Damn those Slashers! How do they know?!"

The following fanzine is dedicated to three important men for their vision, spirit, and talent:

Chris "I made this!" Carter

David "I was too busy getting my ass licked" Duchovny

with great fondness, utmost respect, and lots of tongue in cheek

(but we aren't saying whose tongue or whose cheek)

Editorial: "From the Basement"

Welcome to the first Issue of seXFIies, a zine devoted to Fox Mulder and Walter Skinner (M/Sk), and the first Heart of the Matter Press publication devoted to The X-Files. We almost didn't make it: in the eleventh hour of production, my poor PC suffered a major system crash. But the Fates were kind, because I had just made backup not hours before the dread incident occurred. Talk about SPOOKY!

For general reference, I've been a fan of this show since the first ad for it. Here was a program featuring all the elements I have always been attracted to: the supernatural, the paranormal, UFOs, government conspiracies, and law enforcement/investigation. Not to mention a sexy leading man. The X-Files pushed all my buttons...well, almost all.

As a longtime slasher, I was disappointed that Mulder's partner was not a man — the true formula for so many great slash teams. While I like the character of Dana Scully, the relationship I saw from the start was one of business associates; as the show progressed, I began to see Scully as a surrogate sister for Mulder. I was resigned to have a favorite show that did not afford a regular slash pairing. Sure, I was able to justify Mulder and the sheriff in the episode "Blood," and as a tribute to a former love (Twin Peaks) I linked him up with Charlie Tskany (Michael Horse) from "Shapes." I even gave consideration to Alex Krycek, until he turned out to be a creep. Like a protective mother, I just couldn't see my baby boy settling down with someone like that.

When Skinner came on the scene, I didn't really pay attention right away. For one thing, he wasn't on the show enough for me to develop any kind of opinion. Then came "Anasazi," the cliffhanger episode for second season. Mulder, under the influence of a drug that made him violent, attacked Skinner in the hallway outside his office. The moment Skinner got him into that clinch, I heard my partner — a self-proclaimed borderline slasher — cry out, "Did you see that! We replayed the scene on the VCR...and the rest, as they say, is an X-file itself. Suddenly, I found myself going back to all those brief segments shared by Skinner and Mulder, watching them with new eyes. Yes! It was there! ! had my slash pairing for my favorite show! And it was good.

It still is, despite the changes that have come about in recent episodes. This presents a challenge to the fans who believe in the integrity and tenacity of the Mulder/Skinner relationship. I think the writers featured in this first issue of seXFiles have done a good job of presenting both a believable and entertaining view of these two men as lovers. You the reader will find everything from comedy to drama, intense passion to dangerous encounters; a variety of flavors sure to please every tastebud.

My thanks go to Spookette, Ethan, and Joy for contributing to this premiere issue, and for believing in the romance of the M/Sk relationship in all its forms. To KOZ, for taking a little time out from her extremely busy schedule to throw a couple of illos this way. Also, a nod of appreciation goes to rj and julian for their timely poems. I can always count on you guys.

At the time of this writing, a second issue of the zine is being planned. We already have half of Ethan's hilarious sequel to "The Denny's Cycle" (the rest coming as they get finished), as well as three Robyn LaSalles and a Dee Daniels piece (originally slated for this issue but pushed up to next per the author's request, while he finishes his rewrite). The door is still wide open; anyone wishing to contribute stories, poems, and/or art is encouraged. First time writer? Send something inl If you're serious about writing and open to editing, you can find a place here. The important thing to remember is that this is a publication devoted to Mulder/Skinner. See the ad at the end of the zine for guidelines.

It is my sincerest hope that you enjoy the following. And if you're inspired? Heck, that would be even better. Until next time, keep watching the skies and trust no one with hair.