Nero Wolfe is a fictional detective created by the author Rex Stout. Along with his assistant Archie Goodwin and a strong supporting cast of other recurring characters, Wolfe featured in 33 novels and 39 short stories. The stories have been adapted to most other media including films, comic strips, several radio series and a TV series.

While Nero Wolfe canon consists of hundreds of interesting characters, the stories were always anchored by a revolving cast centered on life in Wolfe's brownstone townhouse in New York City, NY.

Occasionally, Wolfe requires outside contractors in order to gather information.

There have been a number of TV, film, and radio adaptions of Nero Wolfe. Columbia Pictures created two movies based upon the books in the 1930s, the first to good reviews and the second to mixed success. The radio dramas (1940s and 1950s) starred Sidney Greenstreet with a revolving door of voice actors manning the role of Archie Goodwin[1], and are available online[2]. The most recent and best known English language version is the A&E TV series in 2000-2002, featuring Maury Chaykin as Nero Wolfe and Timothy Hutton as Archie Goodwin. 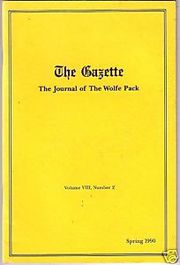 THE GAZETTE The Journal of the Wolfe Pack

Although they are vibrant characters in their own right, Wolfe and Archie could be seen in a way as Stout's AU versions of Holmes and Watson; both are a genius detective and his "man of action" assistant, who not only solve crimes together but live together in the same house, and the stories are narrated from the "assistant's" point of view. Like Holmes, Wolfe abhors women, and like Watson, Archie is a ladies' man. They have a contact in the NYPD, Inspector Cramer, who calls them in on cases; over the course of the books, Wolfe and Cramer's relationship evolves from resentful hostility to almost respectful on both sides, much like the relationship of Holmes and Inspector Lestrade. Wolfe even has his own Moriarty, arch-nemesis Arnold Zeck. And although Archie never marries, he does have a long-term love interest in socialite Lily Rowan.

The influence of the Sherlock Holmes canon can be seen in many of the early Nero Wolfe novels, especially the first four; for instance, the extensive epistolary flashback to the Wild West in "The Rubber Band" recalls the length flashback to Mormon Utah in "A Study in Scarlet." Also, in many of the earlier Nero Wolfe novels there is also a general dependence on foreigners and long-ago crimes committed in "exotic" locales which seems to point back to the Holmes stories as a source of inspiration.

Holmesian, Wolfe-fan and fanwank enthusiast William S. Baring-Gould theorized in his book Nero Wolfe of West Thirty-Fifth Street that, due to Wolfe's genius intellect, and his physical resemblance to Sherlock's brother Mycroft Holmes, Nero Wolfe might actually be the offspring of Sherlock and Irene Adler.

Rex Stout was a passionate, lifelong Holmesian and a member of the original Baker Street Irregulars. He was somewhat infamous for giving a speech at a 1941 BSI gathering entitled Watson Was A Woman. In this speech Stout undertook to "prove," by analyzing the domestic H/W interactions in the original canon, that Watson and Holmes were, in fact, a heterosexual married couple; therefore, obviously, Watson was a woman. Further analysis of literary "clues" hidden in the text revealed that Watson's real first name was "Irene," and that the wedding Holmes attends in "A Scandal in Bohemia" is actually a disguised depiction of his own wedding to the "real" Watson: Irene Watson. (In the conclusion of this speech, Stout promised further shocking revelations, for instance that Peter Wimsey might be the child of Sherlock Holmes and Irene Watson.) [3]

Most of the online fanfiction for Nero Wolfe is slash, with the most popular pairing being Nero Wolfe/Archie Goodwin. Het and more rare slash pairings often include Archie Goodwin paired with Lily Rowan, Saul Panzer, and Inspector Cramer. Gen stories remain relatively uncommon.

Because Archie and Lily Rowan canonically have a happily open relationship, Lily has thankfully escaped the character bashing that often focuses on the love interest of one half of an OTP.

Fanfiction and discussion can be found at: