You may be looking for the article Star Trek Fandom and NASA. 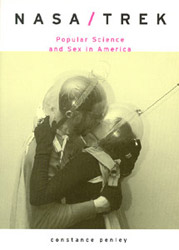 The book has been described as a "dual portrait of the NASA space program and Star Trek fandom from a feminist perspective" showing how each has co-opted each others themes and symbols--in fact, the book's own title slashes NASA and Trek. The second half of the book, "Trek" is predominantly about slash and slash fandom, and features the chapters "/", "Appropriate Technology," "Slash Tactics: Technologies of Writing," "Future Men," and "Unperceived Utopias."