MediaMiner (also known as MediaMiner.org and MM.org) is a fanfiction and fanart archive that primarily focuses on anime fandoms. It also has information on anime series themselves and forums for discussion of many related topics.

There are four separate areas to the MediaMiner.Org website - Fan Fiction, Fan Art, Anime and Forums.

During the early 2000s, it was the default fiction archive for many anime fans, but the site's popularity has waned over time. Some fans attribute this to the old-fashioned, difficult to navigate site structure and layout.

The owners and maintainers paid for the site hosting out of their own pockets. The rest was funded through the sale of merchandise through their CafePress store. Prizes for contests were paid for by administrators connected to the site.

Who Can Save Mediaminer.org From A Slow Death?

For several years, I have been a member of Mediaminer.org. The site is a place for users to share their fanfiction and fanart, as well as connect. The site has not changed much design-wise. Some of the backend is broken as the database often fails to connect to user profiles.

The Mediaminer forum is a serious reflection of this slowly dying site as the forums once thrived with thousands of new threads a day and now dwindling to at least a dozen.

Mediaminer is actually a potential hub for great fanfiction. The amount on anime fanfiction is great, almost third to Fanfiction.net, and Adultfanfiction.net.

The problem is that there are a lot of factors against them: - Lack of moderator presence (including looking into serious accusations before making rash decisions) - Lack of community - Needing a major upgrade to fix the bugs, glitches, and database errors. - More efficient and user-friendly design, including a far better front page than gobs of bordered tables and text - Focus on encouraging the community to interact

However, the scariest factor is knowing the site of its size is just not properly moderated. If Mediaminer wants to encourage people to actually purchase space or attract more advertisers, they may want to pay more attention to the site. [1]

I was in online anime fandom since around 2001 and remember Media Miner. A lot of anime fans cross posted there so their work wouldn’t be lost during the occasional FFN sweeps of deleting adult works. These were based solely on reports, and, while a lot of deleted fics were breaking the rules… some that were targeted weren’t. I recall quite a few writers up-rating their stories just in case during this time. There was a particularly bad purge in the Inuyasha section around 2003-04 (can’t remember exact dates) in which several popular ongoing works were deleted without warning, so those readers and writers moved to follow their favs. Since Media Miner allowed G-thru-Explicit ratings, a writer could host all their fics there. It was a much more practical solution than spliting your works between FFN and AdultFFN. I feel like this might be the reason certain anime fandoms took a while to move onto AO3. Media Miner served that purpose… until around 2010, when the mods stopped maintaining the site and formatting became a nightmare. That’s about the time I stopped using the site myself and drifted over to AO3. [2]

The site is particularly popular with the InuYasha fandom. Older anime fandoms like Yu Yu Hakusho and Weiss Kreuz are also well-represented.[3] 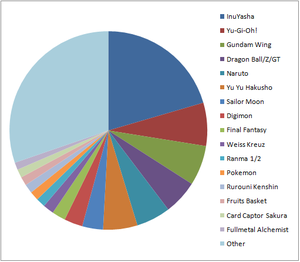 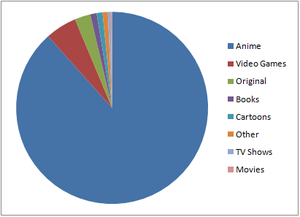 MM.org primarily hosts anime fanfic, but some users also archive other work, particularly fic of Japanese video game series like Final Fantasy. Some of the biggest fanfiction fandoms on the site are:[4]

Some of the biggest fanart fandoms on the site are:[5]

Original art and art based on specific pieces of fanfiction are also very popular.

In late 2010/early 2011, the site crashed. Problems took some time to resolve. As of 2011, some users are wondering whether the site might be past its prime.[6] Other users feel the lower site traffic is a symptom of a general trend in fandom towards less public, centralized spaces.

As of early 2014, the site started showing additional problems, including author profiles devoid of information, story titles replaced by strings of gibberish and, reportedly, an inability of authors to log in, update existing stories or add new ones. These problems, compounded by the seeming absence of the site's staff, appear to have lead to a string of temporary crashes that have made access to the archive intermittent and unreliable.

All stories must include a disclaimer stating who owns the characters/worlds involved in the fiction. While MediaMiner.Org's staff acknowledges that there has been dispute over the weight, if any, a disclaimer holds in legal issues, it was found to be in the best interest of both the site and the authors to require disclaimers. In a January 14, 2007 news post on the Fan Fiction front page, Fanilia outlined the policy in detail with examples.[1]

Adult-oriented content of a lesser degree, such as less explicit sexual content, general violence or other mature content may be rated "Y - Young Adult. Not suitable for children under 17." A "Y" rating usually equates approximately to the content found in "R" rated movies.

All fiction that includes sexual content must follow the laws for Canadian Age of Consent. A link to that information is provided in MediaMiner.Org's Fan Fiction Uploading Rules and Guidelines.[2]

Involvement of Minors on the Site

Any persons under 13 years of age are required to have parental consent to use MediaMiner.Org's website. For those who are over 13 years of age but are under 17, certain content is restricted from view based on the adult nature of the content - both the Fiction and Art archives have filters for adult works. Adult members of the site may choose to optionally screen adult content if they do not wish to view it.

Members found to be using the site or uploading adult works in violation of MediaMiner.Org's age restrictions are handled on a case-by-case basis by the Moderator Team. The reports are reviewed and if such violations are found to be present the minor involved is banned from using the site. Attempts at ban evasion may result in an IP ban. Persons found aiding a ban evasion by using another computer or account to upload on behalf of the banned member will also have their account terminated.

Types of Stories Not Allowed on MediaMiner.Org

MediaMiner.Org's Fan Fiction Site Moderators review reports of these violations individually and determine if the fiction is in violation. Fictions found to be in violation of this policy are deleted and an e-mail is sent to the author explaining why the work was removed.

MediaMiner.Org has a Zero Tolerance policy on plagiarism. Plagiarism is not accepted in any form. If a story is found to be plagiarized, the story will be deleted and the plagiarizing author will be banned without exception. [7]