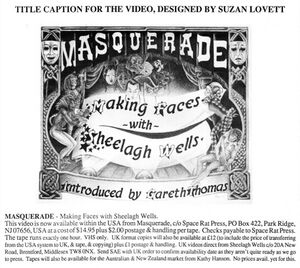 It was filmed at Scorpio #7 and in Joe Nazarro's apartment.

Respected British make-up artist Sheelagh Wells has produced an instruction video on the special effects she has created and used in a career spanning over twenty years with stage, movies, and television. Her credits included Blake's 7, Dr. Who, PBS's series Mystery!, Dracula staring Louis Jordon, as well as many, many more. Special emphasis is laid on techniques which the viewer can easily recreate at home, such as Krantor's makeup for the Blake's 7 episode 'Gambit.' Cover art by Suzan Lovett.

From an interview printed in Horizon Newsletter #23:

So you’ve now finished filming the makeup demonstrations. Which did you do?

I don’t want to give too much away! Basically, there are three full demonstrations. I used Marsha Quinn as a model for the Krantor make-up. I’ve done a demonstration showing step by step the Tegan makeup I used in 'Mawdryn Undead’, and an adaptation of the same technique to do a version of the unmasked Phantom of the Opera. I did a photo-caption demonstration, using Heather Lulham. one of the English fans (...Ed - and former Horizon committee member!) as a model, using the same technique, but colouring the make-up in a different way, so that it gives a different impression.

Also, there’s a demonstration of blood and gore, I do some on me, and some on Joe. I’ve got some new home-made recipes for blood! I used sugar-glass in one of Joe’s wounds and explained what it is - it’s quite easy to make it yourself. It’s made out of spun sugar, or you can also make it out of resin. It looks exactly like glass, but it’s very light and of course it doesn’t have any sharp edges. It does look very effective. I don’t want to go into this, but you can do some really gruesome things!

Then I had a lovely time going around all the party and costume stores. Over in America these shops are very good indeed. I found lots of things which I have shown on the tape, so people know what to ask for in these stores, if they’re trying to achieve a particular effect. False noses, a lovely little cat mask which can be used to do Vincent from ’Beauty and the Beast' pointed ears and pixie noses! I didn’t actually use them in the demonstrations. I’ve just shown them so that people will know what’s available. I’m now spending quite a bit of time here in London, going around similar shops to see what’s available over here. For those who want to order the American products I’m going to include addresses at the end of the video, so even if you live in a small village in the middle of England, it will be possible to get these things.

Now that you’ve finished the filming, what else is left to do, apart from the editing?

The packaging! I’ve written to every member of the original Blake’s 7 cast, explaining what the project was all about, why I was doing a video. Also how more and more of the fans and friends in America had got involved, and how the video had grown. I then asked each of the cast members if they would send a little message of good wishes not only to the fans buying the video but also to the ones who actually made it. Anyway. I received some lovely messages and some very funny ones, and there will be a copy of these going out with each one of the make-up cassettes.

Will the messages be on a kind of flyer inside the box?

Yes, that’s the plan at the moment. We haven’t actually got to the editing yet. so forgive me, things may change a little, just as they grew and changed in the shooting. Ideally, when we come to package the cassette, the messages will be reproduced on a single sheet inside the box.