Martha Wells is a fantasy and science fiction author, known for a series of fantasy novels set in the Ile-Rien universe and for the Murderbot books.

There are two stand-alone novels, The Element of Fire and The Death of the Necromancer, followed by a trilogy: The Wizard Hunters, The Ships of Air and The Gate of Gods. Two of the main characters in the trilogy, Giliead and Ilias, also feature in several short stories published in the sword & sorcery magazine Black Gate.

Wells' other fantasy and SF novels are Wheel of the Infinite and City of Bones, as well as two Stargate Atlantis novels : Reliquary and Entanglement. She's also the author of the Books of the Raksura series, which currently consists of four novels and several short stories.

Wells' stance on fanfic of her works: "I can't say that I'll read it, but I'm enormously flattered whenever anyone does it. Putting that much work into something, because you enjoyed what I did, I take as a wonderful compliment."[1] 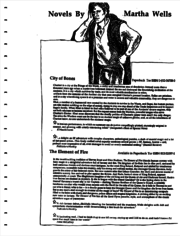 an example of the support, and cross-pollination, of this author as a fan, and as a pro writer: a fan-made ad for Wells' books (illo of Han Solo by Z.P. Florian) was printed in I Don't Care What You Smell #3 in 1997

She was interviewed in OTW 10th Anniversary Chat with Seanan McGuire & Martha Wells.

Wells was a prolific fanfic writer. Her pseud is not linked here on Fanlore.

So far, slash and gen stories in the Ile-Rien universe have been written for the Yuletide challenge.[2][3][4]

There is a LiveJournal community for Ile-Rien fanfic and discussion: ilerien.

There are also stories on AO3 for the Books of the Raksura novels, which have also been included in the Yuletide challenge. [5]

On LiveJournal there is a community for the Books of the Raksura novels; this community is also on Dreamwidth. Said community arranged a Raksura fanfiction exchange on AO3 in 2016.

Wells has put her first novel The Element of Fire up on her website as a free download.