A meme that mocks Netflix adaptations of various anime and manga series by comparing the artwork to photographs of something that vaguely resembles the starring character.

KnowYourMeme.com cites the origin as an image posted to Reddit by user localConurbano[1], which shows anime and manga images of Hotaru Tomoe from Sailor Moon. The final panel features a picture of a black person with a septum piercing and a wig that resembles Tomoe's hairstyle. 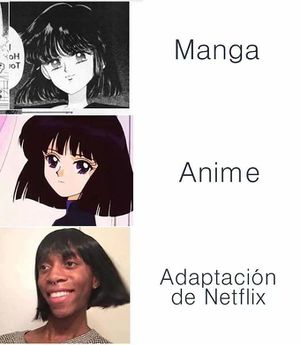 the original meme by localConurbano