Are you looking for information about the movie Magnum Force or any of the other "Magnum Force" Harry & Johnny fanzines? 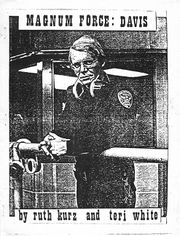 The zine is illustrated by many black and white photo-collages and one drawing by Ruth Kurz.

From the title page: "This story is for all of us who couldn't bear to see David Soul die at the end of 'Magnum Force. Dedicated to David Soul for creating a character that we can care about... and to Clint Eastwood for letting us see that Dirty Harry cares, too."

This zine was the first of the Harry/Johnny zines in the series.

Ruth Kurz wrote in 1982 that the inspiration for the entire series/universe came from a story by Billie Fowler. From Potpourri:

[The] vignette, "Spring Afternoon," by Billie Fowler was the inspiration for the H/J series. Like all Billie's stories it was written for herself alone. She never intended any of her fantasies and "what ifs" to be published, and only showed them to friends who asked for them. I asked her to share with you the the one which introduced me to the possibility of a loving relationship between Harry and Johnny, thus inspiring MAGNUM FORCE: DAVIS. Thank you, Billie.