Loviatar is a digest-sized Dungeons and Dragons zine. It has a cardstock cover and is printed in black and white. While the content is anchored in the Forgotten Realms for common reference, the material can be placed in any campaign setting. Furthermore, the Pathfinder game mechanics can be converted to any other version of D&D.

The editor writes of his mission to not only produce a Dungeons and Dragon zine, but his desire to do it in the tradition of print zines: "While blogs are a wonderful tool for connecting with people who share similar interests, there's an anonymity to the process. It's easy to insult someone from the safety of an avatar with a codename. It's harder to actually sit down, write a letter and drop your anger in the mailbox. Zines are a much more personal and direct way to communicate. You might read and forget a blog post. You're more likely to save a favorite zine for years... [While] the methods of printing vary... [the] creativity and an earnest desire to share and communicate are universal. Loviatar is my effort to continue the tradition of print zines. I put a lot of effort into each issue..." [1]

Loviatar 1 was published in August 2011 and contains 20 pages. 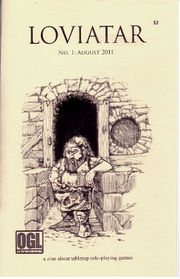 From the publisher: "The premier issue of Loviatar provides everything you need to kick off a successful and exciting fantasy urban campaign. Every hero must begin somewhere and "At the Corner of River Street Street and Craft Way" will get them started. A neighborhood of flats - including a warehouse, former tavern, detached home with loft and a ground level apartment - are fully detailed. Each residence has its own unique history, random encounters, NPCs and suggestions for future development. A few sessions to establish a group of characters can be played with just the material in this issue alone."

Loviatar 2 was published in September 2011 and contains 24 pages. 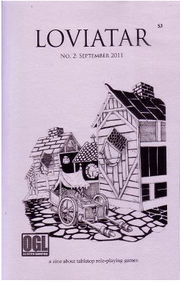 From the publisher: "The second issue of Loviatar revisits the city of Baldur's Gate. "Number Three Pigeon Street" describes in great detail a ramshackle house that is home to a colorful cast of characters, as well as an attic full of dire bats. The home's owner is a brewer of potions and poisons. He knew he had a knack for the craft when he accidentally poisoned his mother. He wasn't overly sad as she used to make him dress up like a little girl and pose for paintings. Other residents include a rogue assigned to spy on the aforementioned wizard, a pantsless, down on his luck bard, and a drifter of low moral character. The house is thoroughly mapped. Each room and inhabitant is described in great detail, making it quite easy to drop into your campaign. The stat blocks are written for the Pathfinder system. Next up is an introduction to the fictional city of Santa Fina. Santa Fina, which is located two hours north of San Francisco, has been struck hard by the recession that has ravaged much of California. An increase in drug-related crime and perpetually gloomy weather makes the city a perfect backdrop for a World of Darkness chronicle. The article - "A Lonely Dance on a Cold Northern Shore" - also introduces four Covenants of Kindred who vie for power. This article is the first in a series detailing the vampires who hunt and kill in the city's streets. Finally, we turn our attention to GURPS. "Eclipse, Lord of the Mountain" introduces a genetically engineered giant. Eclipse has been directed by the enigmatic "Masters" to closely monitor a group of humans. In the coming months more about the Masters and the island of Antissa, where Eclipse and marooned humans live, will be revealed...This issue offers fan support for Pathfinder, GURPS and Vampire: The Requiem."

Loviatar 3 was published in October 2011 and contains 24 pages. 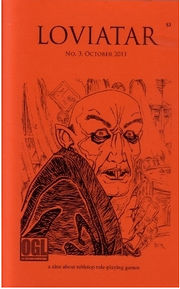 From the publisher: "The gritty streets of Baldur's Gate call! In this issue you'll meet some violent toughs who lurk along the miserable neighborhood of Pigeon Street. They call themselves the "Murder Boys" and they live for a good scrape with rivals. They are affiliated with a mysterious cleric of Mask, who urges the gang on to greater acts of violence and intrigue. Next, we return to the cold, dreary city of Santa Fina to visit with Barnabus and Persephone. Together, the pair of Nosferatu form a small, yet dedicated, covenant of the Circle of the Crone. They are largely left alone, except for would-be ghost hunters that frequently invade the abandoned casino where they dwell. After, read about the wolves of Antissa. The Masters thought that talking, genetically-engineered wolves would be the perfect tool with which to spy on their human test subjects. The aliens underestimated the wolves' independent nature and refused to comply. Finally, Abel Artone is dead. He doesn't really mind, though. He's laying in the grass, staring up at the great spire at the center of the Outlands. All is well until he hears hooves approaching... This issue offers fan support for Pathfinder, GURPS, World of Darkness and AD&D 2e."

Loviatar 4 was published in November 2011 and contains 24 pages. 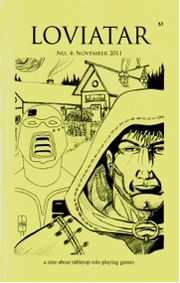 From the publisher: "When the humans' colony ship was intercepted by the enigmatic Masters, the robots in the cargo hold were put to use by the aliens. The Masters had already failed miserably with their intelligent, talking wolves so perhaps the humans' robots could be turned into effective spies. The humans quickly discovered the deception and now an uneasy relationship has emerged. This GURPS article presents more background on the human zoo, as well as detailed descriptions of two robots. Abel Artone, recently deceased, has had his nap interrupted by the lovely Mora, a bariaur Indep. Mercykillers are prowling the area, so Mora leads a wary Abel to a kip shared by herself and two other faction members. The kip - located inside a petrified giant - provides scant protection against a determined Segreant Gev and his Red Death bashers. This is an article for Planescape, with plenty of maps and stat blocks to help you get your extra-planar freak on. Finally, we have some X-plorers on tap. Micah is a cold, barren planet orbiting a dim, tired star. The planet would be deserted were in not for a university that attracts a variety of scholars and off-world clients. The planet - with its mostly intellectual population - is at risk of being undone by a rising tide of criminals and corporate agents. An intrepid team of X-plorers would find their skills in great demand. This article offers a detailed planetary description, as well as a map and special rules for characters hailing from Micah... This issue offers fan support for GURPS, AD&D 2e and X-plorers."

Loviatar 5 was published in December 2011 and contains 24 pages. 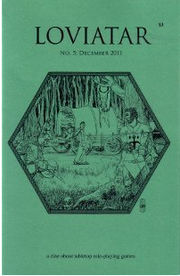 From the publisher: "Hex 001, an article for Basic D&D, gets things started. If you want to run a hex crawl/ sandbox style campaign you're going to need a place to start. Hex 001 provides that beginning. The article offers maps, illustrations, adventure hooks, planned encounters and suggestions for future play. With this article you will be able to get your campaign off to a great start. Next up is a GURPS article that continues a series describing the bizarre world that the passengers of a colony ship now find themselves trapped on. In this installment, the enigmatic aliens referred to as the Masters have taken a bold step in controlling human reproduction. They have rendered their test subjects sterile and have begun placing genetically engineered babies with selected families. Adding to the horror is the fact that the aliens have experimented with gender, creating a third sex to live among the colonists. Finally, zombies invade the pages of Loviatar! Inspired by AMC's hit show "The Walking Dead", a zombie for the World of Darkness is presented. It can be used as part of an encounter or as the feature enemy in a chronicle dealing with an undead outbreak."