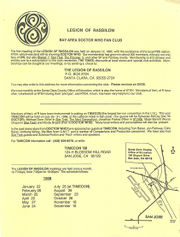 The Legion of Rassilon is an influential US-based Doctor Who fanclub, which, as of December 2017, is still active. It was founded as a chapter of the North American Doctor Who Appreciation Society (NADWAS).

The first meeting was held at Kelly Park, Santa Clara, CA on Tuesday the 12th of January, 1982.

In the 1990s, members of the club appeared in the fan film The Prisoner and the Time Lord, produced by Beeblebrox Company.[1]

In 2011, the club was featured in the Contra Costa Times on the 50th anniversary of Dr Who.[2]

The first meeting of the LEGION OF RASSILON was held on January 12, 1982, with the assistance of the local PBS station, KTEH, which was (and still is) showing DOCTOR WHO. Our membership has grown to about 300 members, who are not only fans of DW, but also Blake's 7, Star Trek, The Prisoner, V, and other SF and Fantasy media. Membership is $12.00/year and entitles one to a subscription to the club newsletter, THE TIMES, discounts at local stores and special club activities. Memberships can be bought at our meetings, or by sending a check to: THE LEGION OF RASSILON P.O. BOX 2724 SANTA CLARA, CA 95055-2724 You may also write to this address for more information concerning the club. Please enclose an SASE. We meet monthly at the Santa Clara County Office of Education, which is also the home of KTEH. Members of the LofR have often volunteered at KTEH during their "pledges", and KTEH, in turn, has been very helpful to our club. Members of the LofR have been instrumental in putting on TIMECON (the largest fan-run convention in the U.S.).