Legends of the Lost Weyr

Legends of the Lost Weyr is a gen Dragonriders of Pern anthology.

From the First Issue

Legends of the Lost Weyr ...is our fanzine. Members receive at least one copy free during their membership. The only extra requirement being that they send us a SASE (self addresseed stamped envelope) with enough postage to cover the cost of nailing the zine.

MEMBERSHIPS: Membership for one year is $5. In that year you will receive at least 6 newsletters and at least one zine. Members are encouraged to write at least their Impression story. Any other submissions to Legends is gratefully appreciated. Membership begins as of the moment we receive your fee and expires on the last day of the same month one year later. Renewal notices will be sent out and should be answered within one month. If you join after a zine has been put out, you will be able to buy that zine at a special club price, depending on availability. We have occasional membership drives and members bringing the club the most members can win very nice prizes. When there are several members in one area, we like to have club dinners. All members are encouraged to have these. 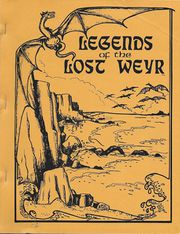 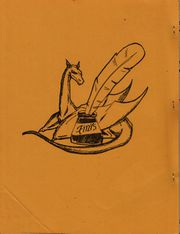 Legends of the Lost Weyr 1 was published in April 1980 and contains 93 pages. It has art by Todd Hamilton, Hunter, Karen Pauli, Paulie, Janet Wells and Joanne Papin. It was edited by Joanne Papin.

Greetings! Legends was originally supposed to be solely for the members of the club, The Lost Weyr. however, enough people have told me that I should make it available to everyone, that I have decided to do just that. I certainly hope it gives you the enjoyment it gave us.

You will find a very different Pern in these pages, due to Anne McCaffrey's personal request that her established characters and locations not be mentioned. So... out of respect for one of the people I most admire, I and several friends invented Fairhome. It has been called the Pernese Bermuda Triangle -- well, it's that quite THAT bad.

Each issue of Legends will enable you to understand our culture more. You will be introduced to and become familiar with several regulars on the island. Each issue will be presented, not as a regular fan-zine with on-related stories, but as a book, with chapters written by our members. Each issue will have stories of our past, our present, and our Impressions. I'm very proud to present this fanzine. All of us at Otter Limits are. Enjoy! -- Paulie Gilmore, Torina of Fairhome.

If the essence of fandom is the wish to join in with the object of the fandom, then this explains several features of fandom, such as Mary Sue characters and FIAWOL. It also, when the fandom is Anne McCaffrey's dragon world of Pern, accounts for the Lost Weyr.

LEGENDS is ostensibly the Weyr Records of the non-Canonical continent, Fairhome, created and staffed by members of the club The Lost Weyr. Members create their personas and write about them for the club 'zine. How else in this day and age can one really and truly Impress a dragon? Or at the very least a fair of firelizards. The authors might also impress the potential reader, for the stories are fairly competent, and though much shorter and less formed than McCaffrey's original works, they show many similarities in style and plot, especially to the more domestic of her short stories, or Dragonsinger. Occasionally sentimental. Nan Burridge, Trav Kintar, Pat Beese, H.P. Benedict, Mary Cowan, Richard Curth, and Ben Thomas manage to stay away from the treacly; the pieces mostly about youngsters, are charming without being cloying. Paulie Gilmore's art is lively and facile, well-suited to her subject, and Todd Hamilton, the other major artist, does a good map of Fairhome. 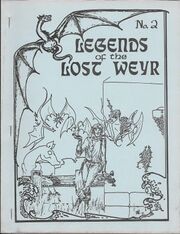 The editorial in the issue numbered #2 says "I'm not sure whether to welcome you to the second or the third issue, since Legends of the Lost Weyr #3 had already been published...". 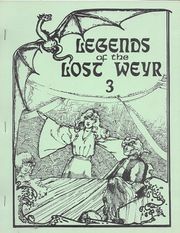 Legends of the Lost Weyr 3 was published in January 1981 and is 77 pages long.

Greetings! And welcome to the third issue of Legends of the Lost Weyr. This issue is about a very special time for the island community of Fair-home -- Giving Time -- the mid-winter festival when the turn changes and people give gifts to their loved ones.

The wint'ry mood is set by our opening poem, after which we travel back 768 turns into Fairhome's past, where our island is recovering from double disaster, to watch two young men search for fire-lizards and find Love instead. We move forward, then, about 600 turns to get a glimpse of a Giving Time Gather.

It is in Fairhome's recent past that we see what must be the most unusual Impression in the history of K'laxton's Weyr. Following this are a trio of stories about what happens when Oadon, the island's resident flower-child (who gives fire-lizard eggs instead of flowers), gives some of his special gifts to three very different people. One of the three, the "Fire-Lizard Healer of Gokell's Hold", can't find time for present-making in the next story ... Fire-lizards play a part in yet another story, as a family is reunited. And finally, our present Weyrleader looks back to the very first Giving Time.

Of course, fiction is not the only thing in Cegenils. Each story is illustrated by the talented Limners of Fairhome, with incidental art between stories. And our final seasonal offering is 3 song with original words and music included.

Many thanks to everyone for sharing their talents with us and with our readers. Thanks also to Nikki and Rich for typing everything except this editorial. Thanks to the writers for their cooperation and the artists for their swift and beautiful illustrations. And finally, many thanks, many times, to Rodger Gonder for his guest editing on "The Living Gift" and also welcome to him as he joins the zine staff with the next issue.

We hope you enjoy reading this as much as we enjoyed making it happen. We would welcome your thoughts, comments, and constructive criticisms new and in the future, and we encourage everyone who reads this zine to send us a Letter of Comment.

Finally, a special Season's Greetings to Anne McCaffrey. None of this would be possible without her. Thank you.

Legends of the Lost Weyr 4 (simply "Legends" on the cover) was published in May 1987 and contains 92 pages. Art by Tanje, Kelly Dwyer, Edgar, Tami Allen, J. E. Tribke, Diana Stein, and Paulie. 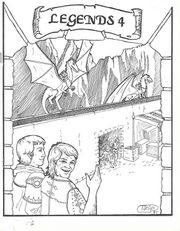 It was edited by Rodger Gonder and Jan Gosnell.

Greetings, we finally made it! You now hold issue 4 of LEGENDS in your hands.

It took some doing, many a late night with blurry eyes and fingers worn to the bone, but we succeeded against these tremendous odds and many setbacks to end up with this great zine.

We have for your enjoyment, two poems and six stories written by a variety of talented authors and illustrated by some excellent artists. We enjoyed reading them and think the artists who illustrated them did a great job too.

Throughout the long process of putting this zine together, Rodger and I went through fits of despair, moments of anguish, many a sleepless night and hours and days of hopeless dejection, (I sure hope all this doesn't show on our haggard faces!) Despite the trials and tribulations, I honestly think both of us enjoyed putting the zine together and we are foolish enough to take on LEGENDS 5 and LEGENDS OF THE LUST WEYR, our BLUE ISSUE as soon as we have enough submissions to go to print.

This is Rodger and my first attempt at a zine together. It has proved to be a good learning experience for both of us. We hope we've done a good job, We've put out 5 issues of the LOST WEYR'S newsletter, THE ARCHIVIST in the past year and have found that we work together like a well oiled machine with only a few screws loose, and look forward to continuing this relationship.

Rodger here for just a few short words, I'd like to take this time to thank all those involved in making this issue of LEGENDS possible, especially everyone involved in the editing process. It wasn't all that easy with most of the stories being sent out to various locations in the States and Canada, but despite a few problems with the Canadian Post Office, everything turned out all right. For some reason the Canadian Postal System kept eating one story that Jan Gosnell was editing for us. So I had to resort to Illinois Bell to help us out. We sat down and went thru the edit over the phone. I then sent the changes to the author by mail. Later, the author, Kathy Sullivan and I discussed the needed changes over the phone. Thank the Gods! for Ma Bell. I hope you will all enjoy reading this zine as much as I had fun putting it together (he can't be serious), The stories are good so I won't keep you from them any longer.