The Lost Weyr is a Dragonriders of Pern fan club. 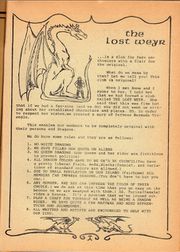 printed in Legends of the Lost Weyr #1 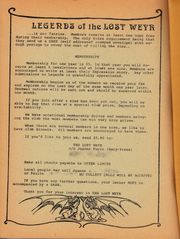 Legends of the Lost Weyr ...is our fanzine. Members receive at least one copy free during their membership. The only extra requirement being that they send us a SASE (self addresseed stamped envelope) with enough postage to cover the cost of nailing the zine.

MEMBERSHIPS: Membership for one year is $5. In that year you will receive at least 6 newsletters and at least one zine. Members are encouraged to write at least their Impression story. Any other submissions to Legends is gratefully appreciated. Membership begins as of the moment we receive your fee and expires on the last day of the same month one year later. Renewal notices will be sent out and should be answered within one month. If you join after a zine has been put out, you will be able to buy that zine at a special club price, depending on availability. We have occasional membership drives and members bringing the club the most members can win very nice prizes. When there are several members in one area, we like to have club dinners. All members are encouraged to have these.

Also from the first issue Legends of the Lost Weyr:

Lost Weyr is a club for Pern enthusiasts with a flair for the orginal. What do you mean by that? Let me tell you! This club is original. When I met Anne and spoke to her, I told her that we had formed a club called "The Lost Weyr." She said this was fine but that if we had a fan-zine (and we do) she did not want us writing about her established characters and places. SO, in order to respect her wishes, we created a sort of a Pernese Bermuda Triangle.

This enables our members to be completely original with their persona and dragons.

We do have some rules and they are as follows:

1. NO WHITE DRAGONS
2. WE HAVE FILLED OUR QUOTA ON ALIENE
3. NO QUEEN DRAGONS (our queen and her rider are fictitious to prevent politics)
4. ALL DRAGON COLORS HAVE TO BE OK'D BY COUNCIL (You'll have a pretty liberal field. Reds, Blacks (female), and various standard colors are allowed.)
5. DUE TO SMALL POPULATION OF OUR WORLD (Fairhome) ALL MEMBERS CAN IMPRESS DRAGONS (You don't have to but you can.)
6. ANY MEMBER, ANY SEX CAN IMPRESS THE DRAGON OF THEIR CHOICE. (We do ask at this time that you go easy on the bronze as we are swamped with them.) AE. Torina (female) rides a bronze. It's a problem that we've ironed out.
7. PLAN A CRAFT FOR YOURSELF AS WELL AS BEING A DRAGON RIDER. WE HAVE QUITE A FEW MASTERS AND NEED APPRENTICES AND JOURNEYMEN.
8. ALL WRITERS AND ARTISTS ARE ENCOURAGED TO HELP WITH OUR ZINE.

From the fourth issue of "Legends of the Lost Weyr":

[The Lost Weyr premise is] derived from Anne McCaffrey s Dragonriders of Pern series, serves as the oasis for personae and stories by members of The Lost Weyr. While retaining much of the spirit of its source, Fairhome has acquired its own unique approach to the difficulties of tfe on Pern. With a culture which has expanded to include three Weyrs, fourteen Holds, and a multitude of Crafthalls, there are almost unlimited possibilities for member involvement — including contributing to the history of Fairhome, which is far from completely developed in The Lost Weyr, the emphasis is placed on the "ordinary" people of Pern. Members are welcome to develop any persona which is consistent with the previously established material, and are encouraged to contribute their own ideas on the history and customs of Fairhome. All major figures on Fairhome (such as the Lord Holders, Craftmasters, and weyrleaders) have already been established and are available for use by all members, and members are encouraged to include each other's personas and characters in stories.

Members of The Lost Weyr receive a quarterly newsletter, The Fairhome Archivist, which contains information on club activities, updates to the Fairhome Archives, and short stories, artwork, and other member contributions. In addition members can get at postage cost The Fairhome Factsheet, a set of extracts from the Archives which provides the information needed to develop a persona, as well as various other member benefits (such is discounts on copies of club publications.)

Membership is $8.00 per year Send check or money order (no cash, please) payable to The Lost Weyr, or a SASE for further information to the address below [address redacted]