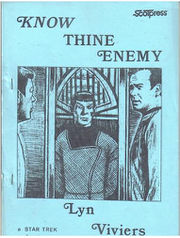 A very alternate universe story where Earth and the Klingon Empire are allied against the Vulcans.

Mimeo, beautifully illustrated. As with all material handled by ScotPress, it is a quality piece -- well-written and gripping from start to finish. I thought (oh foolish me) that I could start reading it and put it down when I had to get the children ready for school. Well, they had to get themselves ready didn't they? Because I was encaptured by the story. It is an alternative universe where Klingons and Terrans find themselves as allies in the Federation against Romulan and Vulcan aggression. At least that's what Captain Kirk of the USS Enterprise believes until after the sacking of Vulcan, he had his own Vulcan slave, Spock, and he begins to find there's more to the situation than what there seemed to begin with.

Lyn Viviers has an entertaining style with an exciting story making a zine well worth reading. The full page illustrations by Martin Delaney are fitting and faithfully portraying the characters.

This is good! The Klingon Empire and Earth against Vulcan and her allies makes for an exciting tale. Spock is taken as a slave by Kirk to his home. [He's] the only one who can sense what's wrong, contrives [an] escape and Virtual Peace Treaty, Alice Kirk sees through her son and his captive, but... I like the story very much but it is undeveloped as if the author could not decide how much to use in her story. Perhaps with a collaborator, it could be expanded into a much deeper story with more detains of the earlier conflicts, etc. [2]