All I Want for Christmas Universe

Victorious in Defeat Post-Kitsunegari tale--what happened after the warm and fuzzy close in Skinner's office.

Rolling the Dice As the relationship continues to develop, Mulder and Skinner each have to deal with various issues.....like total terror of intimacy.

Sanity as an Index of Reality The classic Oops moment as Scully discovers that nature of Mulder's relationship to their AD.

Ships and Sails and Sealing Wax Pure fluff (isn't it all?) about continuing developments in the Mulder/Skinner relationship.

All I Want For Christmas A series of letters, journal entries and scrap notes during a crisis.

Home Mulder's return from the ill-fated trip and the adjustments required after revelations have been made.

1-800-TRU-STME Meaningless drivel over the phone.

Cats Mulder's birthday, the household has a new occupant and Mulder and the new occupant are rather territorial. Or rather, Mulder is.

Out of the Dark, A Novel

Home From the Sea

The Red and the Black

A Kiss is Still a Kiss

A Sigh is Still a Sigh

Kassandra's Other Page For those Other XF Pairings 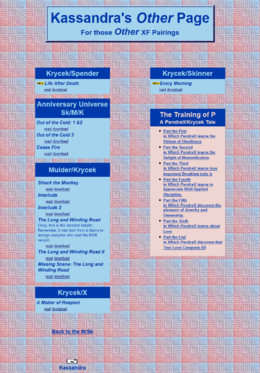 Out of the Cold 3

The Long and Winding Road Okay, this is the dreaded babyfic. Remember, it was born from a desire to avenge everyone who read the MSR version.

The Long and Winding Road II

A Matter of Respect

The Training of P - A Pendrell/Krycek Tale

Part the First in Which Pendrell learns the Virtues of Obedience

Part the Second in Which Pendrell learns the Delight of Mummification

Part the Fourth in Which Pendrell learns to Appreciate Well Applied Discipline.

Part the Fifth In Which Pendrell discovers the pleasure of Jewelry and Ownership.

Part the Sixth in Which Pendrell learns about Love