Kamen Rider Kuuga is a tokusatsu superhero television series. The original airing consisted of a total of 49 episodes and was broadcast from January 30, 2000 to January 21, 2001. The series sparked the revival of the Kamen Rider series as the first Heisei series.

In the year 2000, a tomb is disturbed and an ancient evil unleashed. Yusuke Godai happens to receive a belt that was recovered from the ruins of the tomb, which is absorbed into his body and he becomes Kamen Rider Kuuga. He has to fight the Grongi, the race that have been unleashed, as they are killing people to establish who the strongest is among them and the rightful inheritor of the ancient evil.

In 2015, Kuuga received a manga adaptation, written by Toshiki Inoue and illustrated Hitotsu Yokoshima. The manga is set to receive an English release in 2022. The story of the manga strays significantly from the original show, including having a crossover with Inoue's own rider season, Kamen Rider Agito.

if you want to know what we're in for with the kuuga manga getting brought over...enjoy
SunshineMoonRX on Twitter

just remembered the kuuga manga that Inoue wrote where Ichijou kisses a man trying to bite off his own tongue is being published in English...
SailorHannibal on Twitter

The Art for the Kuuga manga is so cool

Cant wait to get my hands on that second volume

Just found scans for the 2015 Kamen Rider Kuuga manga and Ichijo got hit with the bishie-beam (not that he wasn't handsome in the show) but look at this twink!
Rufus2k2 on Twitter

You know, I'm sure the Kuuga manga is perfectly fine and all, but I will never forgive it for giving Godai one of the worst haircuts of all time.
Omgiamonfire on Twitter

Oh jesus the Kuuga manga's getting translated. God help us.
ProjectorZero on Twitter

i'm reading the kuuga manga atm and i love that its put under the horror and mature genres when its based on a children's tv show.
mintcandyz_ on Twitter

The manga version of Kuuga also appeared in Kamen Rider Zi-O: Over Quartzer, which caused a reaction from fans.

Alright, I knew that Manga Kuuga was in Over Quartzer but I didn't realise that meant *Manga* Kuuga.

I thought it was just a suit inspired by the manga Kuuga or a Kuuga suit coming out of a manga. I was not prepared.

Ffs Manga Kuuga appears. MANGA KUUGA. You think the five year olds who were hype for the little keychain trinket that came with their ticket preorder were reading Inoue’s manga that runs in a seinen mag?
Revieloutionne on Twitter

The novel was released on June 28, 2013 in Japan, and was later translated by RevolutionPotato into English. The novel is set 12 years after the end of the original series.

The novel was particularly popular with 51 shippers.

Remember in the Kuuga novel how Ichijo spent the first few chapters just pining over Godai/saying how much he misses Godai's smile? I remember :)
K_N_O_C_K_O_U_T on Twitter

thinking about how in the kuuga novel ichijou had been waiting 13 whole ass years for godai to come back. never stopped thinking about that man. so true love. homosexuality at its finest
gabutyra on Twitter

There is also a more general appreciation for the novel.

Some fans, however, were less pleased with it.

While Kamen Rider Kuuga was aimed at children under 12[1], its casting of Joe Odagiri as Yusuke Godai caused the show to gain a large fandom of adult women in their 30s, starting with the parents of the children watching the show.

The show also has gained a reputation in recent years for being more "mature" than other rider seasons.

Been doing a Kuuga rewatch with the Lil Bro, and honestly it might be the most "mature" tokusatsu show I've seen.

And that's not because it's "dark" or "edgy". Both kids and adults can enjoy it in completely valid ways.

But what I really appreciate now are the human elements. The Gurongi play on very real fears, to a point where you could draw parallels to terror attacks pretty easily.

And Kuuga doesn't mope around on that. Instead most of the secondary cast goes about their daily life in almost every episode. It's sort of a "even if there's bad things happening in the world, life goes on" And I think that message hits home to me now more than ever.

Final Hot Take to end this rant. If you complained about the Gurongi being subbed you're a moron. Any speech that isn't in Japanese is literally: "Ah I did the most killings today, haha"

Kuuga is a amazing show, mature power rangers type action while also a crime drama would recommend too anyone if they can get into that stuff.
NeoSonOfKrypton on Twitter

I think Kuuga might be my favorite RIDER show. Why? Because Kuuga is the purest expression of Ishinomori's ideas for Kamen Rider, as a safely scary show with a pure hearted wandering hero, refining themes that go back to 1971 to a razor sharp edge. It's modern and mature but also a fitting swan song for classic Rider. Kuuga isn't quite Showa but it isn't quite what Heisei Rider would end up being either! If Rider ended at Kuuga it would be a fitting swansong, but it's also the perfect bridge into the future while protecting our smiles. No fear! No pain!
VicPerfecto on Twitter

I think it's funny how so far Kuuga feels darker and more mature than the episode of Amazon Riders that I watched, the actual R rated Rider series
Mizert_ on Twitter

Crazy how mature Kuuga looks compared to where Heisei ended up.
DirtyHarrington on Twitter

The older era of KR is way more mature than the newer stuff but some of the newer ones also have some pretty dark stuff like Gaim and Build. You can start with Kuuga which was the first series of the Heisei era and it's available legally from Shout Factory.
WarIordOfMars on Twitter

I would like to see Ruder return to a little more mature story telling. Not the ridiculous level of Kuuga, but something a little less outright goofy. Like targeted at 12 year olds.
njiska on Twitter

While shipping is popular in the fandom, there are very few ships with any popularity in the fandom. The main ship is Yusuke Godai/Kaoru Ichijou, most commonly known as 51 in the Japanese fandom and known by the same name in some parts of English-speaking fandom. The ship name comes from the Japanese spelling of their names, 五代 and 一条. While other ships exist, few of them move beyond the state of rare pairs and fanfiction will frequently only have them as a side ship or a ship to break up in favour of 51.

Within the wider Kamen Rider fandom, Kuuga has a legacy in response to shipping in the shows. 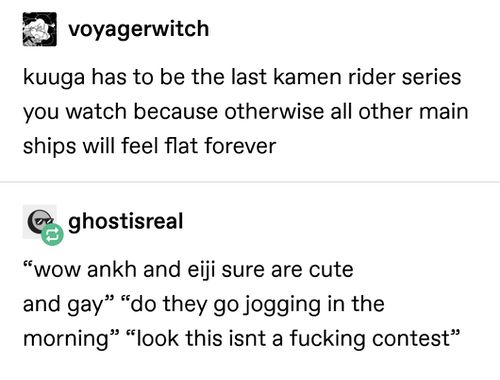 Many fans feel that no matter how much shipteasing happens in other Rider shows, it will never live up to the development between Yusuke Godai and Kaoru Ichijou in Kuuga. While usually a jokish response, many Kuuga fans will say, Kuuga won the (non-existent) ship war.

Godai Day is a celebrated day in Kamen Rider fandom on the 18th of March, the birthday of protagonist Yusuke Godai and the passcode for the Trychaser in the series. Started in a similar vein to Kamen Rider Faiz's "Kaixa Day", the day is the exact opposite sentiment. While Kaixa Day is a a day for "being a dick", Kuuga Day is about doing something to help. Other ways to partake in the day include rewatching Kuuga or posting content related to the show. [2]

The "Odagiri Effect" was named after Kuuga actor, Joe Odagiri. While Kuuga was aimed at children under 12, it gained a large audience of women around the after of 30. A dedicated fandom sprung up due to people tuning in because Joe Odagiri was attractive. The next year, Toei attempted to recreate this effect, casting three attractive male actors for Kamen Rider Agito, and, once again, the series gained attention from people initially watching for the attractive actors.[1] While this phenomenon wasn't new, this was the series that got its name and the principle has become widely adopted to pull in fandoms for series.