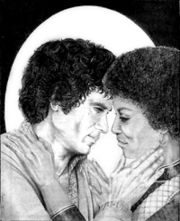 Joan and Starsky from The Thousandth Man by Suzan Lovett

Joan Meredith (most often called "Meredith") is a cop.

She was fourth in her class at the Academy and used to work in Juvenile. Dobey assigns her to be Starsky's partner while Hutch is in the hospital recovering from a bullet wound.

Joan Meredith tells Starsky she is well-aware that her being black and female fulfills two quotas at once.

Starsky and Joan Meredith work well together, and in fact so well, they appear to end up in the sack together. At the end of the episode, Starsky jokes, in front of Dobey and Hutch, that if Hutch were ever shot again, he'd want her as a partner.

A Few Facts About the Canon Joan

The fanon Joan is almost always presented in a very positive light. Sometimes she comes back to help on further cases. In het stories, she and Starsky get paired up. She is occasionally paired up with Huggy, too, perhaps due to his joking remark that she would become his future wife.

More commonly, though, Joan is a conduit for much angst on Hutch's part. Starsky's remark about wanting another partner, combined with the tensions of the fourth season, add much material to both gen and slash fiction.